Venice was (oddly) paired with our trip to Ireland. And, for as beautiful as that country of green is, we needed some sunshine and blue skies on our horizon. So, after four days in Dublin, we flew into Venice for four days in Italy. If you’re looking for a way to organize some of the main cities in Italy for a quick weekend, we broke down our trip by:

With this quick trip to Italy, I learned to wander, especially in Venice. I practiced taking it slow and clearing off the agenda.

Here is where I wandered off to: 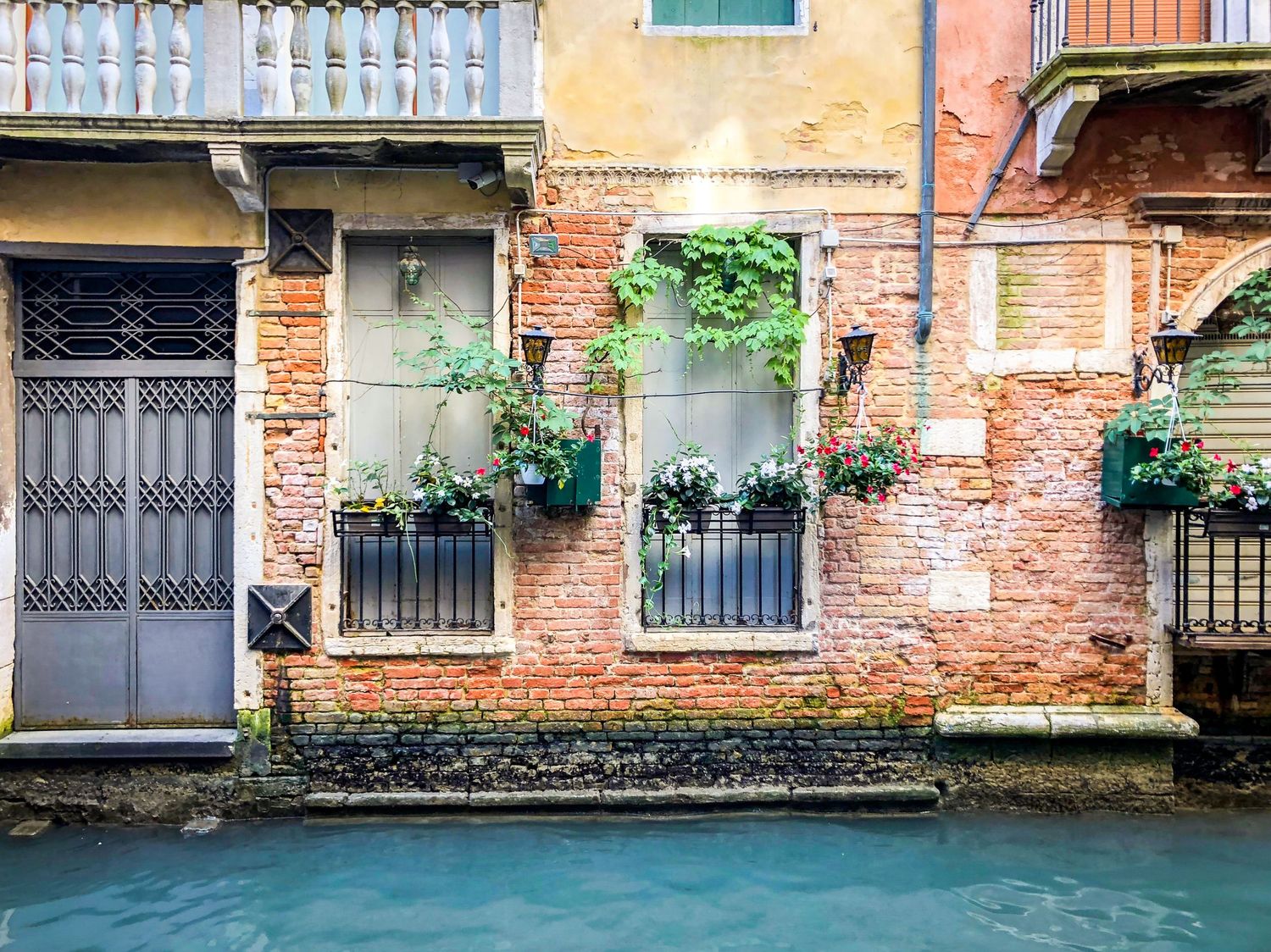 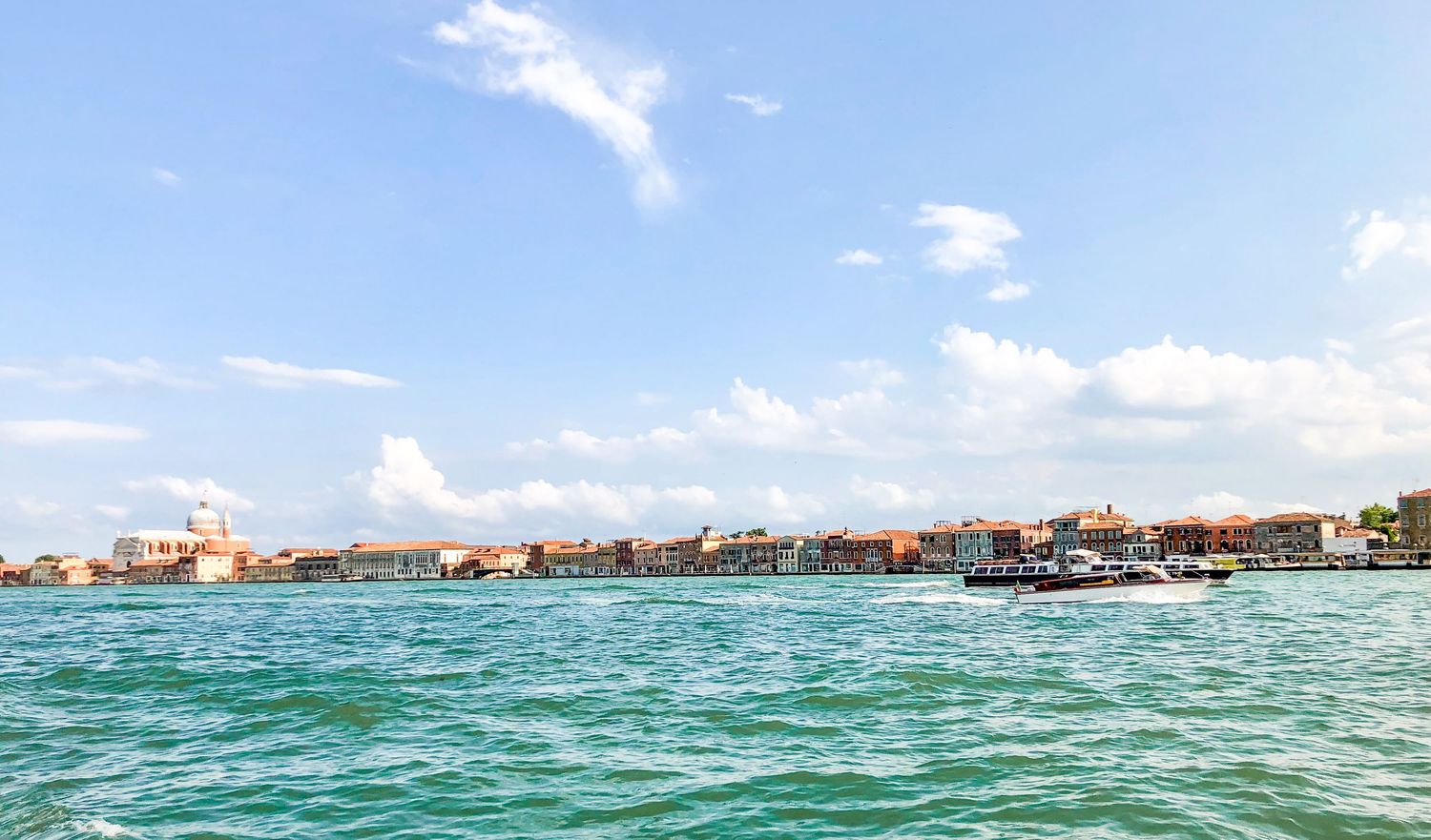 The Piazza San Marco is the main square in Venice. It houses St. Marks Basilica, the bell tower, lots of ornate shops, gelato stands, and adorable restaurants. Surrounding the square, giving it its beautiful decor, is Doge’s Palace. It’s a nice time to walk the square, pop into the shops or simply sit and enjoy a coffee. We snapped some photographs here, then took the elevator to the top of the bell tower. 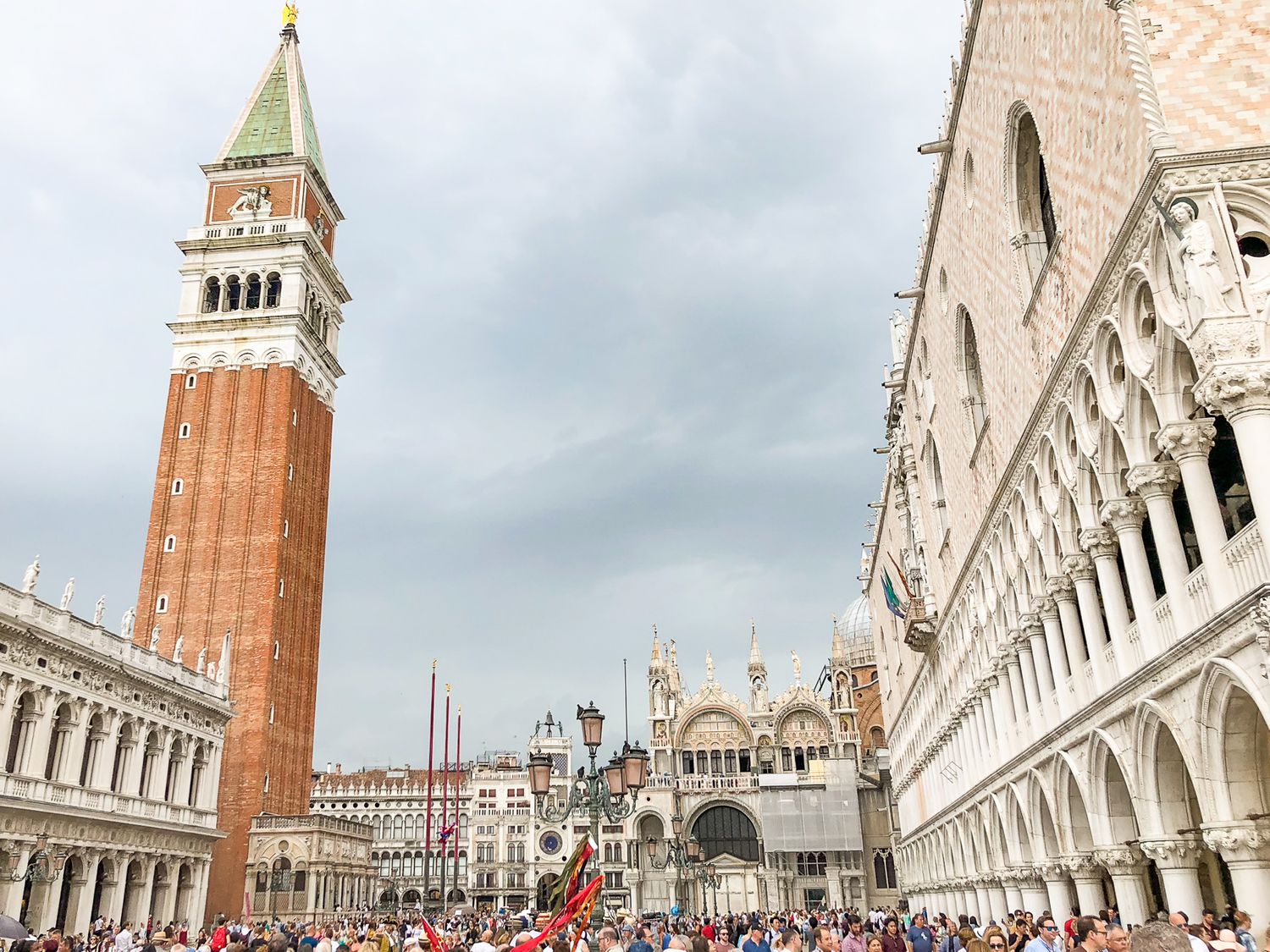 Climbing St. Mark’s Campanile wasn’t something we had planned to do, but rather, decided to do while walking around the Piazza. The Campanile is the Basilica’s bell tower, rising up 99 meters high and providing a view of Venice you cannot find elsewhere! It is possible to find skip-the-line tickets before you go, however we simply bought tickets on the spot. There was a small line that moved quickly and an elevator zipped us to the top. 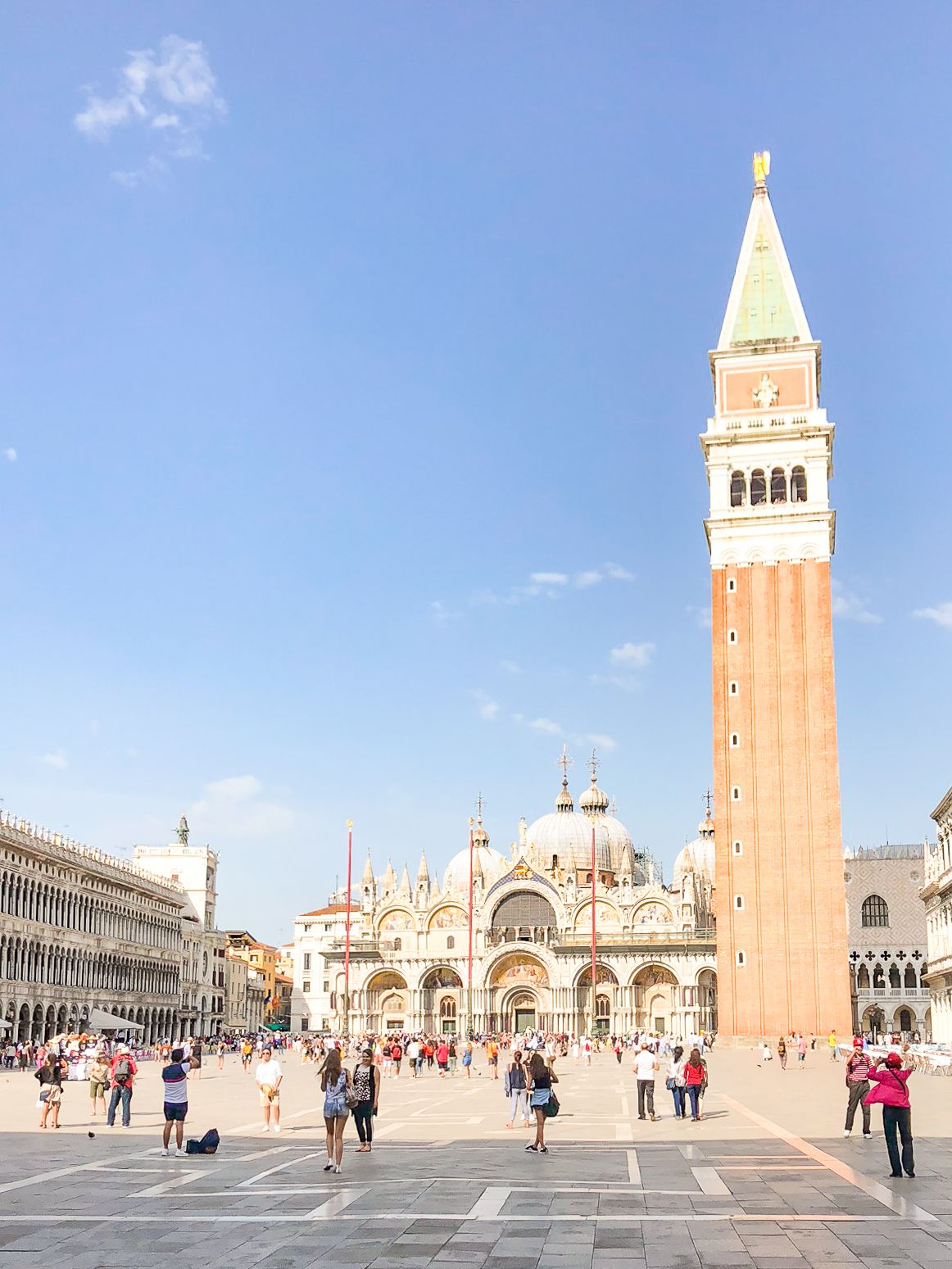 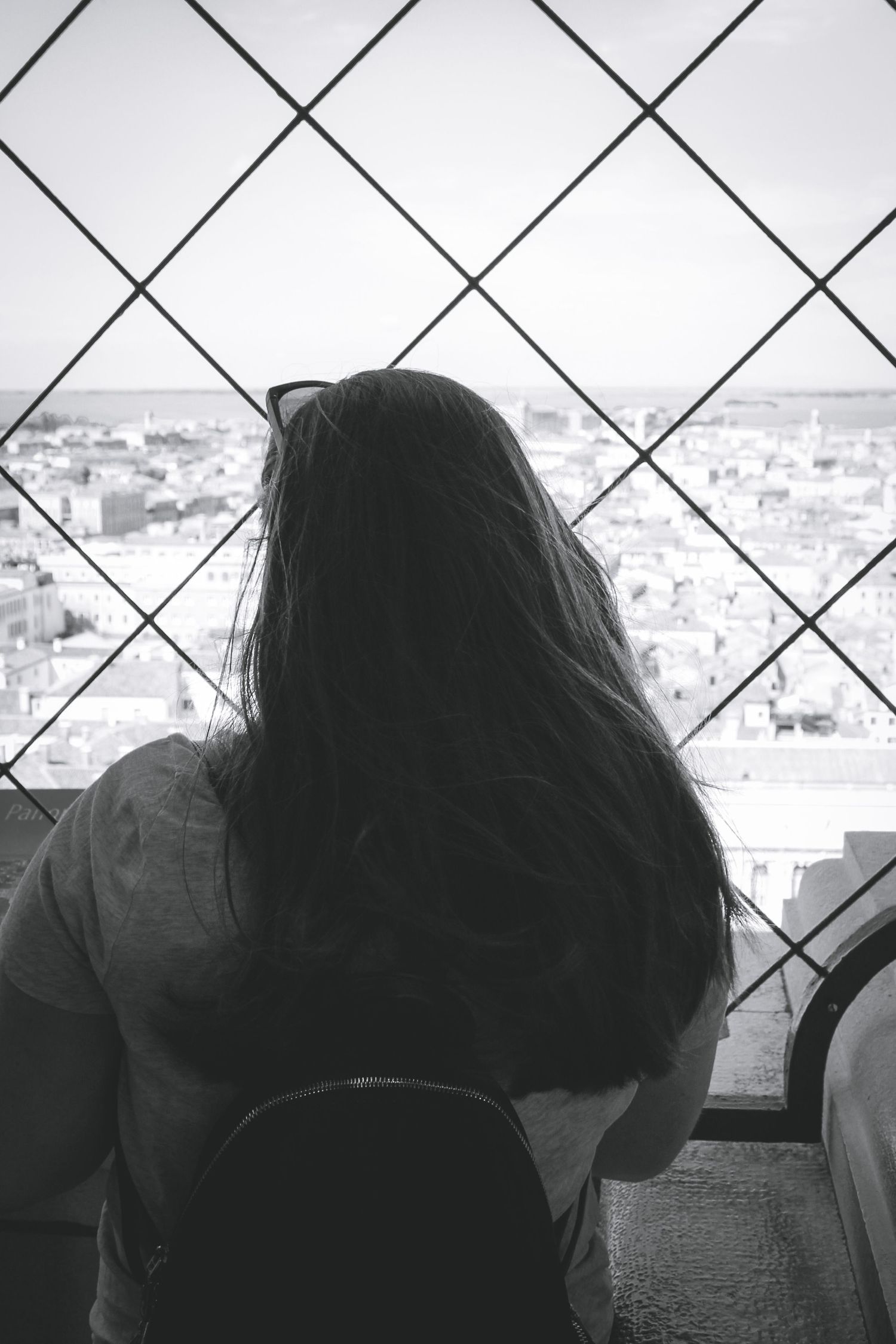 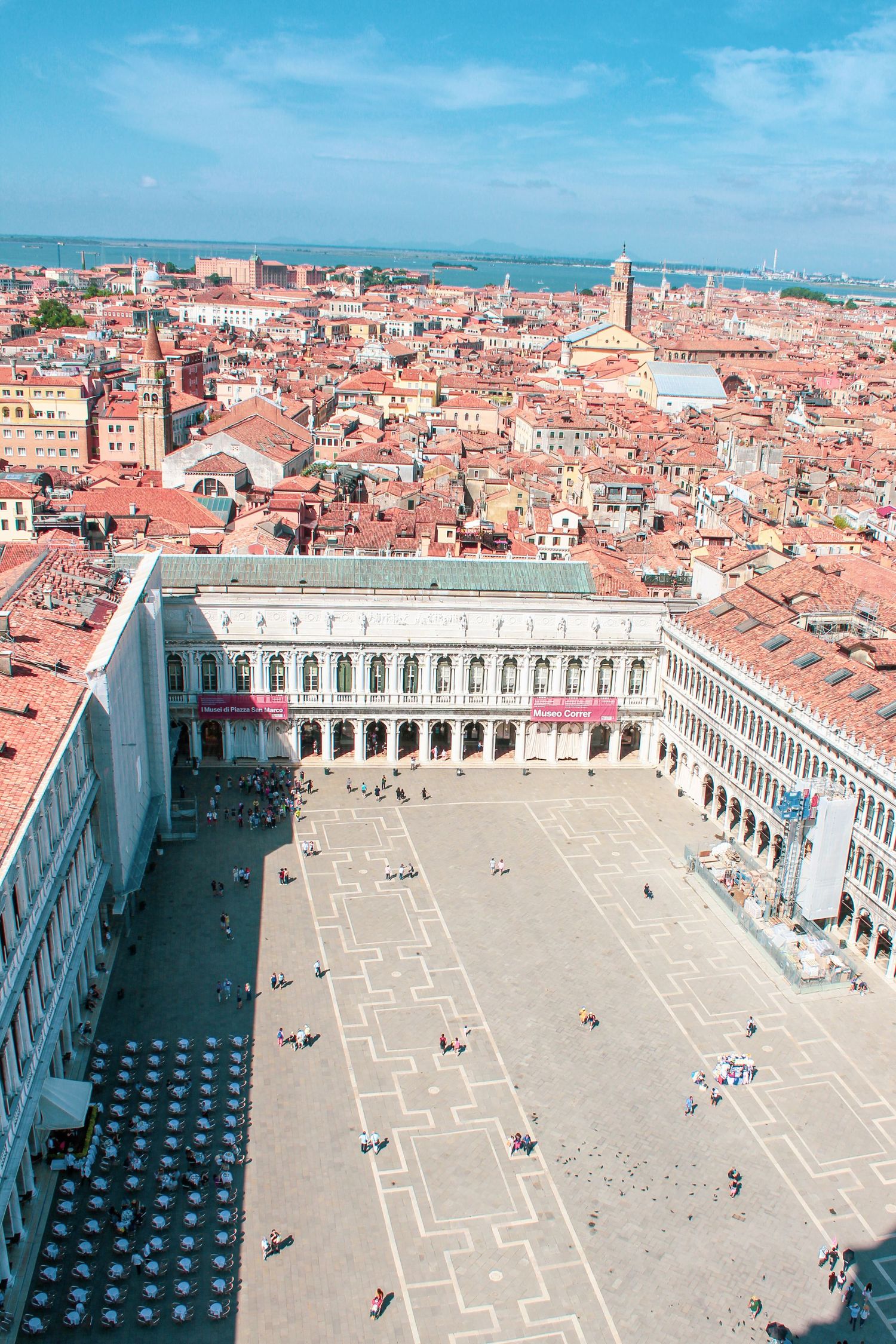 We booked a two hour small group tour, Essence of Venice, by Avventure Bellissime. Our guide was named Fred (Fredrica, formally) and we spent the afternoon learning the fundamentals of Venice and the Venetian people. The first hour of the tour Fred took us inside Venice’s oldest cathedral, St Marks. This Basilica holds much importance and great pride for the Venetians. Construction began in the 11th century and it is made famous by its golden facade. The Basilica also claims to house the remains of Saint Mark,

may he rest in peace,

in front of thousands of tourists.

Some things to note when touring the Basilica: 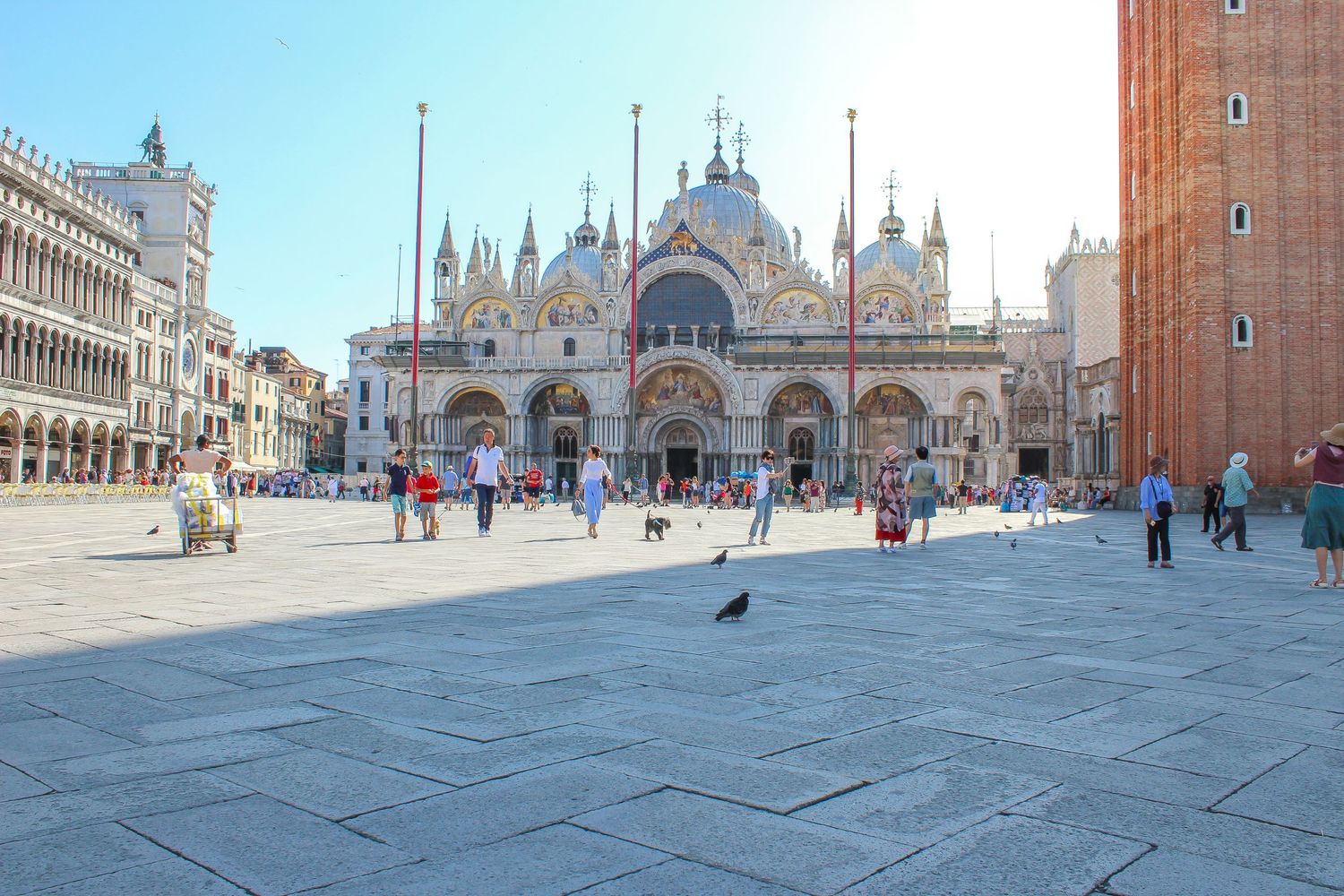 We toured Doge’s Palace on day two in Venice. You’ll need a ticket to tour the palace and, much like the Basilica, the lines are dreadfully long. If you use the website to book your tickets ahead of time you’ll be able to skip the line and head right in, after you pass through security. The tour we choose was the “Secret Itinerary Tour,” which was fantastic! The Doge’s Palace can be described as their court and justice system, prison, and ultimately, Venice’s home to the equivalent of U.S.’s FBI. So the “secret itinerary tour” skips over what the traditional tour would include (you can see that afterwards) and instead you get to see the prison cells, hidden passageways, tunnels, and disguised offices of the Venetian “FBI”. You’re even told the story of Casanova and his great escape, while standing in his cell! This tour is about one hour and 15 minutes long and costs 20 euros each (plus one euro for convenience fee with online booking). The tour ends at the palace courtyard, and as long as you do not exit the palace limits, you are free to tour the rest of the palace and its exhibits. This was one of my favorite tours we took on vacation, it was a quick tour and a really interesting (and secret!) find. 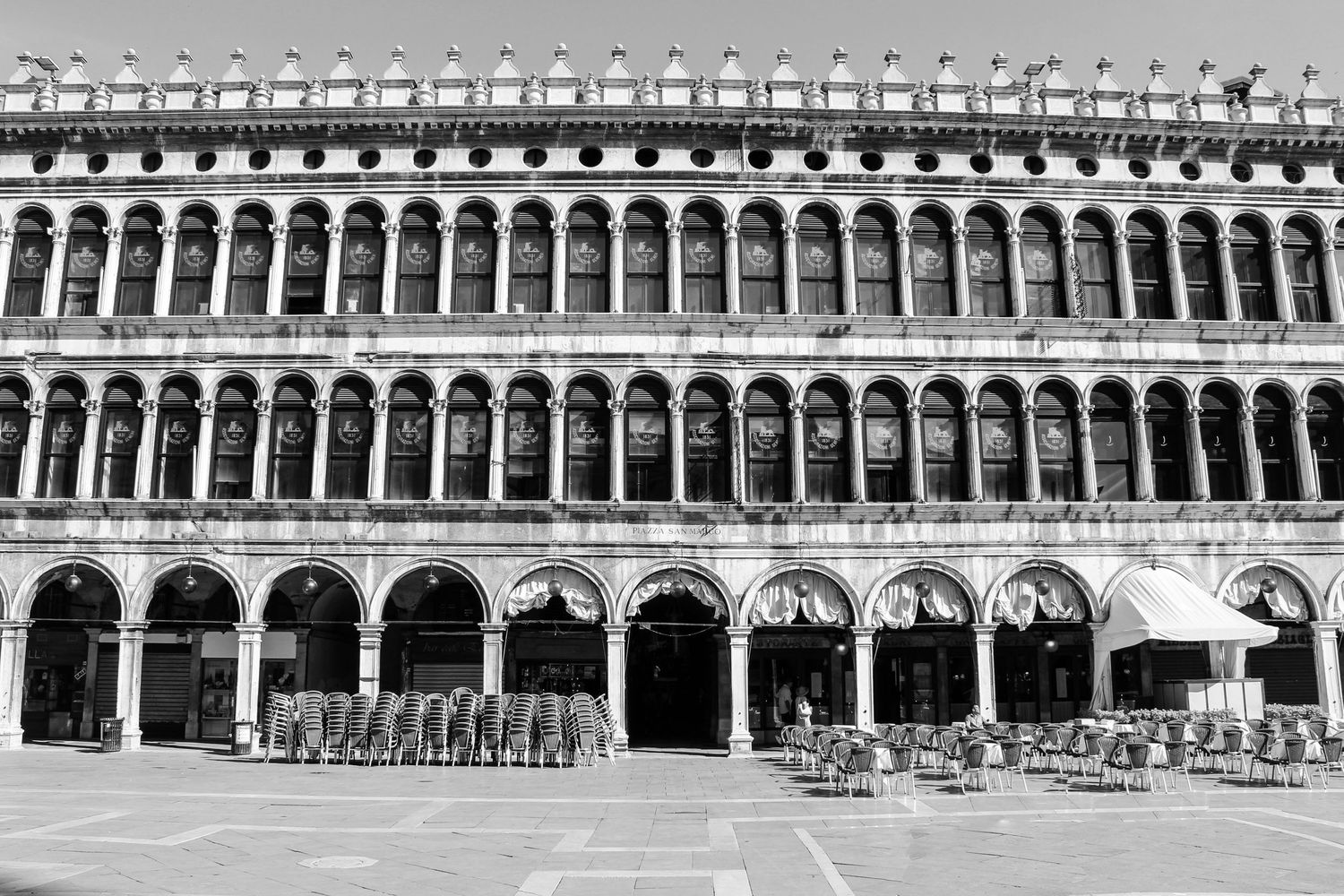 The Bridge of Sighs is a beautiful piece of architecture with a troubling story. The bridge ties directly into Doge’s Palace, connecting two buildings across the canals. As I mentioned above, Doge’s Palace had the duty of keeping Venice safe, the work done inside was to monitor the citizens, spy and listen for any corruption, treason, or traitors. When a citizen was accused of these types of crimes, they would be tried and imprisoned in the palace (in the basement or behind the walls). As cells began to fill up, death and disease quickly spread throughout the palace, so in order to keep everyone safe and disease free, a jail was built across the street (err…canal). During the construction of the jail, a covered bridge was built, connecting the palace, where the criminals were tried and processed, to the new jail where the criminals would live out their sentence (mainly until death). During the “Secret Itineraries tour” you are able to walk across the bridge and explore the jail cells and torture chambers. So, how did it get its name? The bridge is covered, dark in all directions with wood floors beneath you and stone walls on either side. There are four windows in the bridge, letting in slivers of daylight and mere glimpses of the city of water outside. As prisoners would cross the bridge, from their trail to their imprisonment, these windows offered a last and final look at Venice for their lifetime. Prisoners would look out the window and sigh, never to see Venice’s blue waters again.

A Bridge of Sighs. 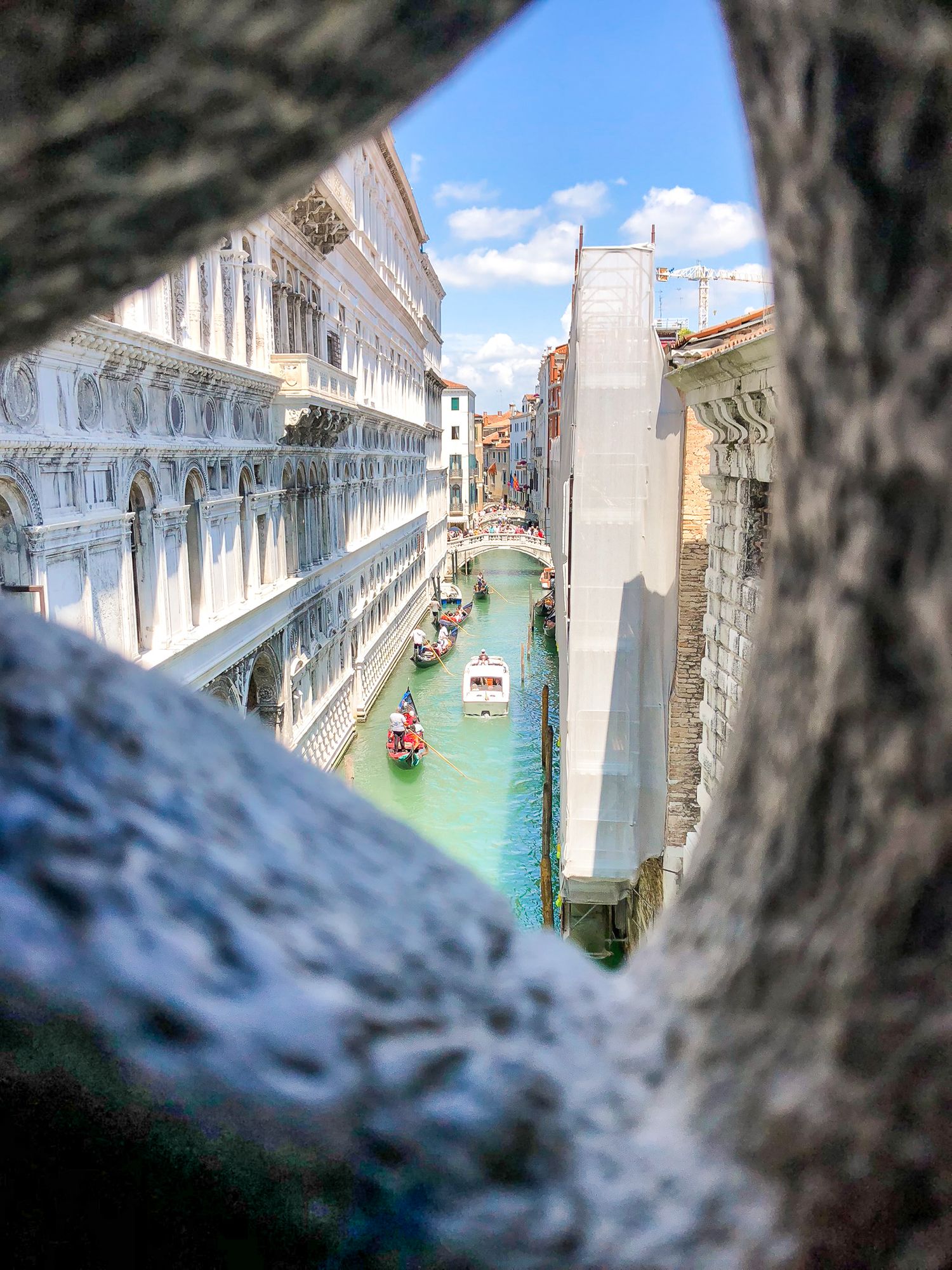 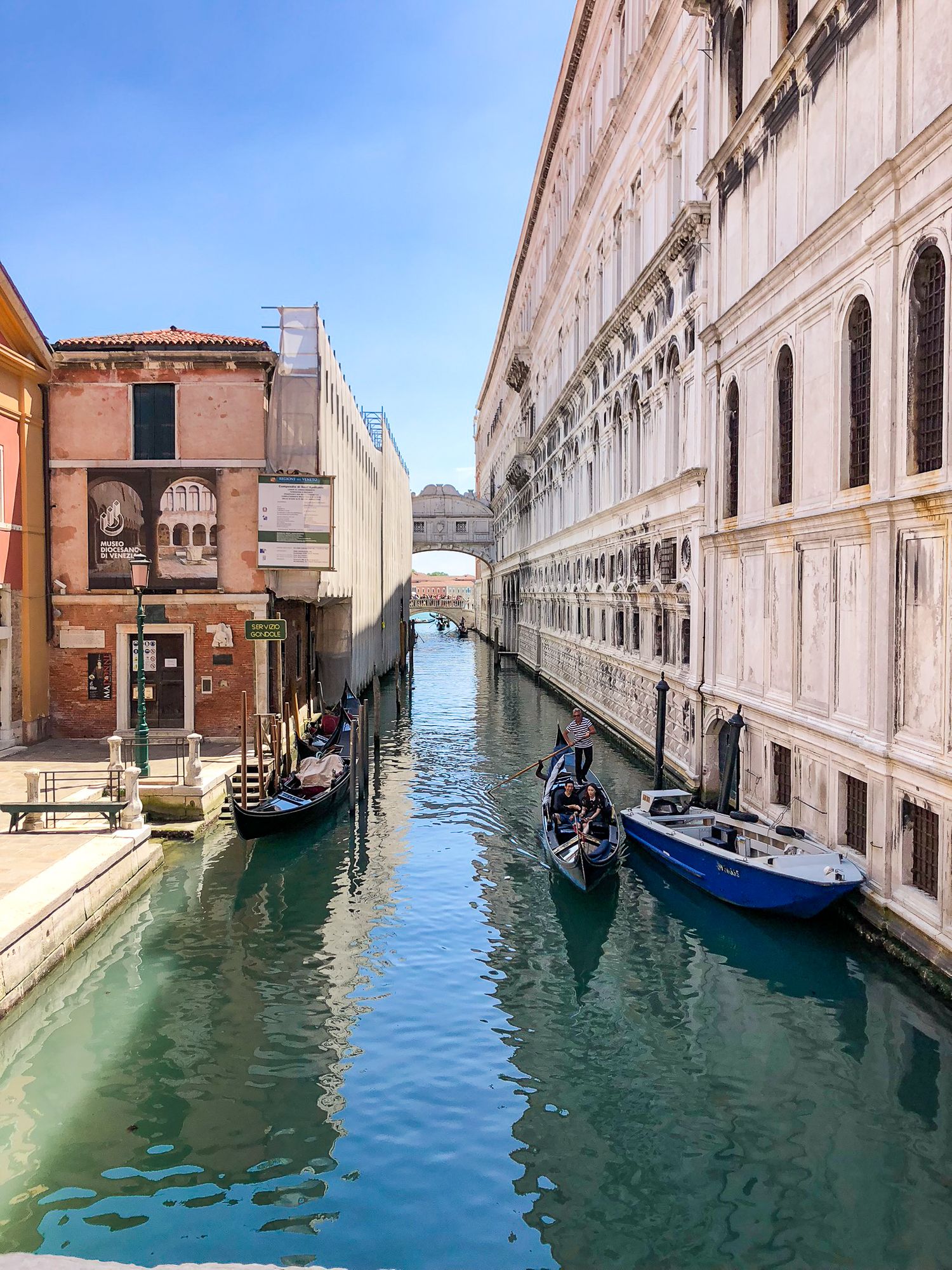 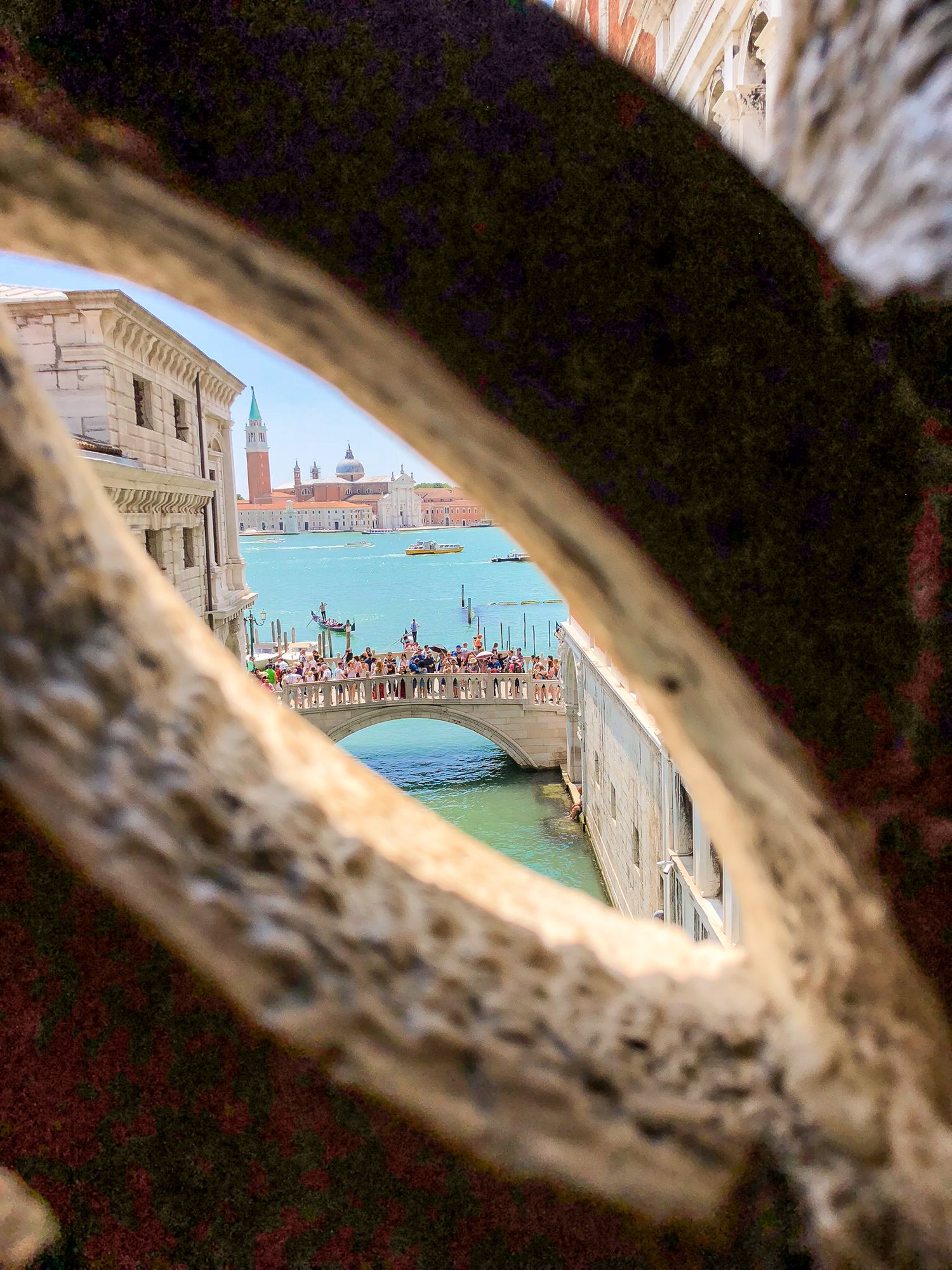 With a story not as interesting as the Bride of Sighs, the Rialto Bridge is the most famous bridge in Venice. The bridge is the largest within the city, connecting residents and tourists over the main canal. It is said that walking the Rialto bridge will give you the gift of youth.

Which also means that this bridge is super crowded.

There are lots of restaurants along the main canal here, it is a bit touristy, but it’s definitely worth the maneuvering to pick a place, grab a table and enjoy the view. 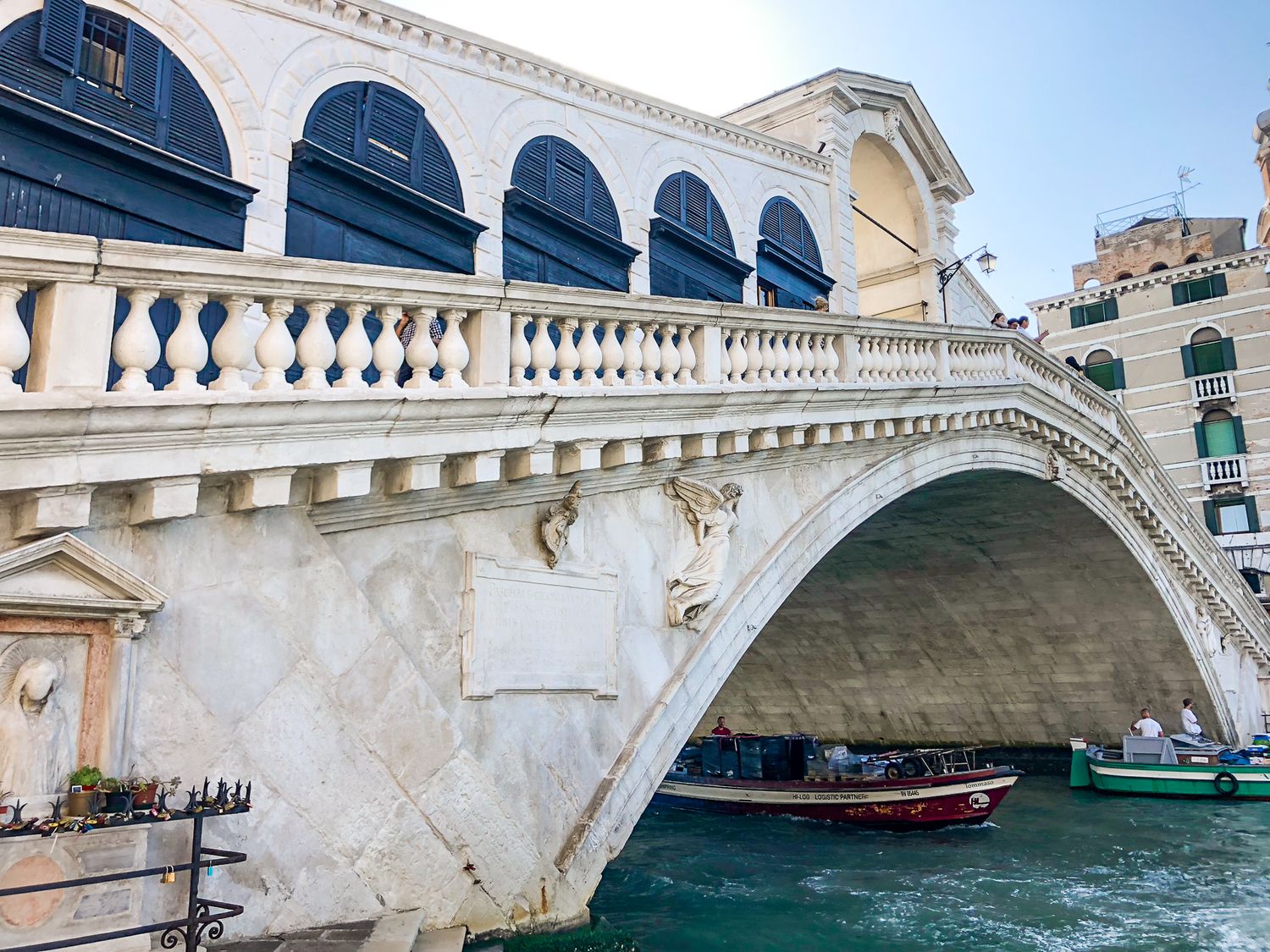 Perhaps the best way to spend your time in Venice is to simply wander. Keep your phone in your pocket, try not to check the maps, make turn after turn, cross bridge after bridge, and see where you wind up. With no cars or mopeds in the streets to worry about, you can take your time, stroll the streets and keep your head in the clouds. The streets are tight a narrow, twisting between homes and ancient landmarks, making for an exciting adventure,

even if you don’t know where you are going. 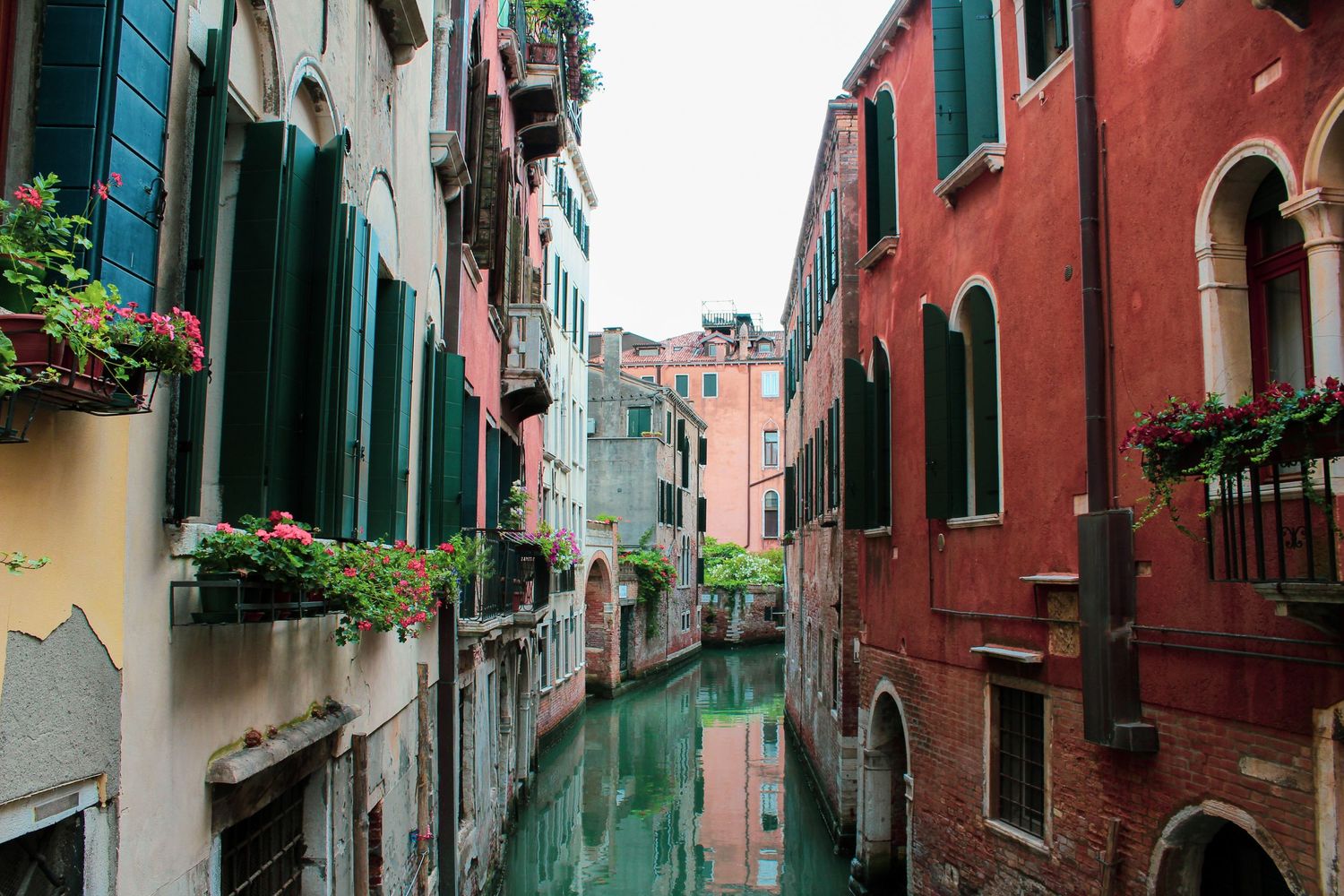 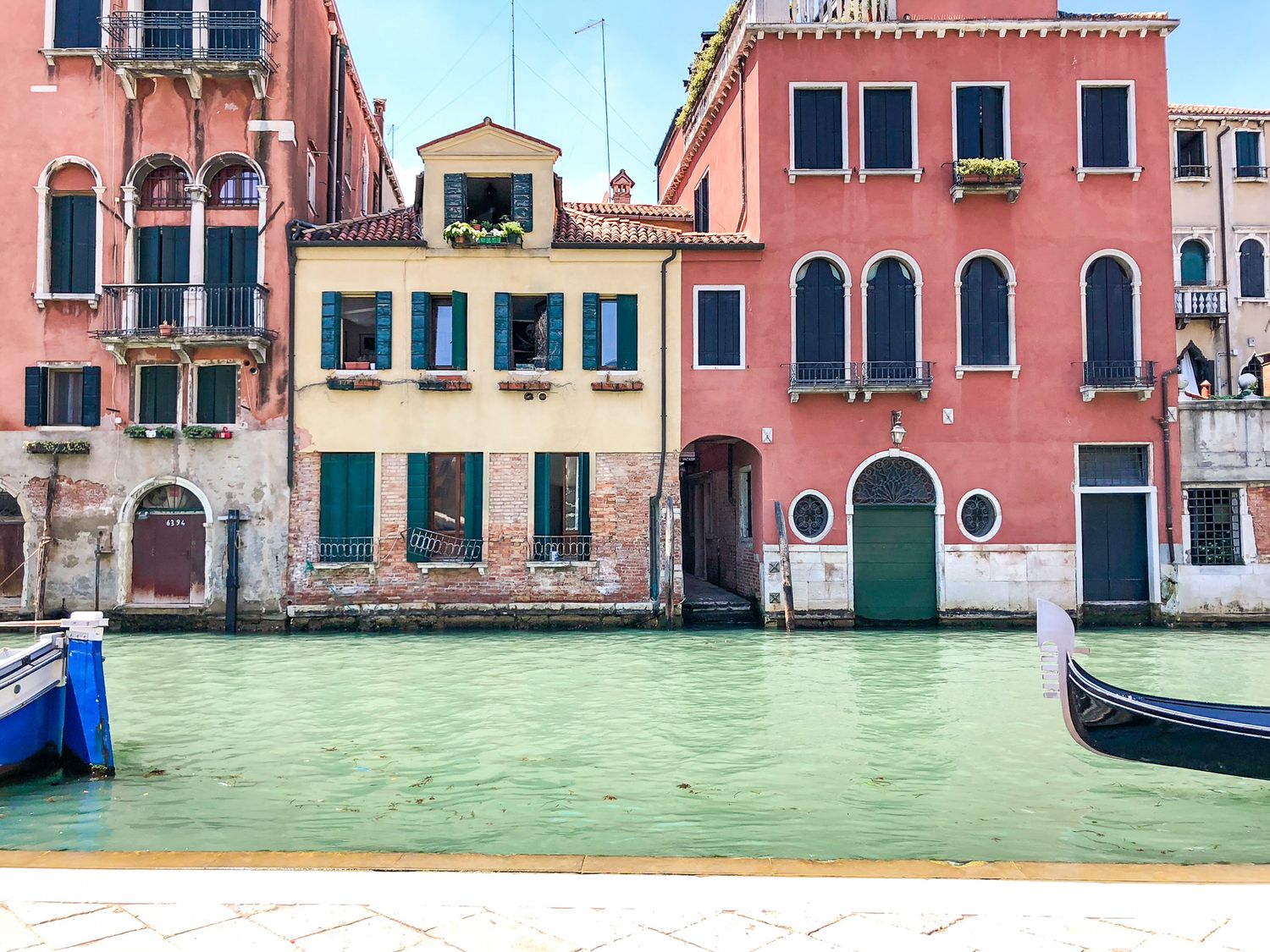