My fiancé has an adoration for Amsterdam, I imagine it has to do with the canal houses, bicycles and stroopwafels, but for me, this city was less than desirable. Maybe it’s because we went during a snowy December in 2017 or because I do not enjoy my fries dropped in mayo, but at first, I really could not find the love for this top visited city.

Paris had more atmosphere and Rome has mopeds.

In 2019 we traveled here again and this time we rented a car and headed for the Hauge. The Hague is toward the western coast and holds the Supreme Court and multiple government seats of the Netherlands. We planned to see the city, spend some time in the countryside and along the coast, before heading to Amsterdam.

We drove in silence still adjusting to the timezone and jet lag, but from the pristine roads, lined with wind turbines, I could see what more there was to love about this place. 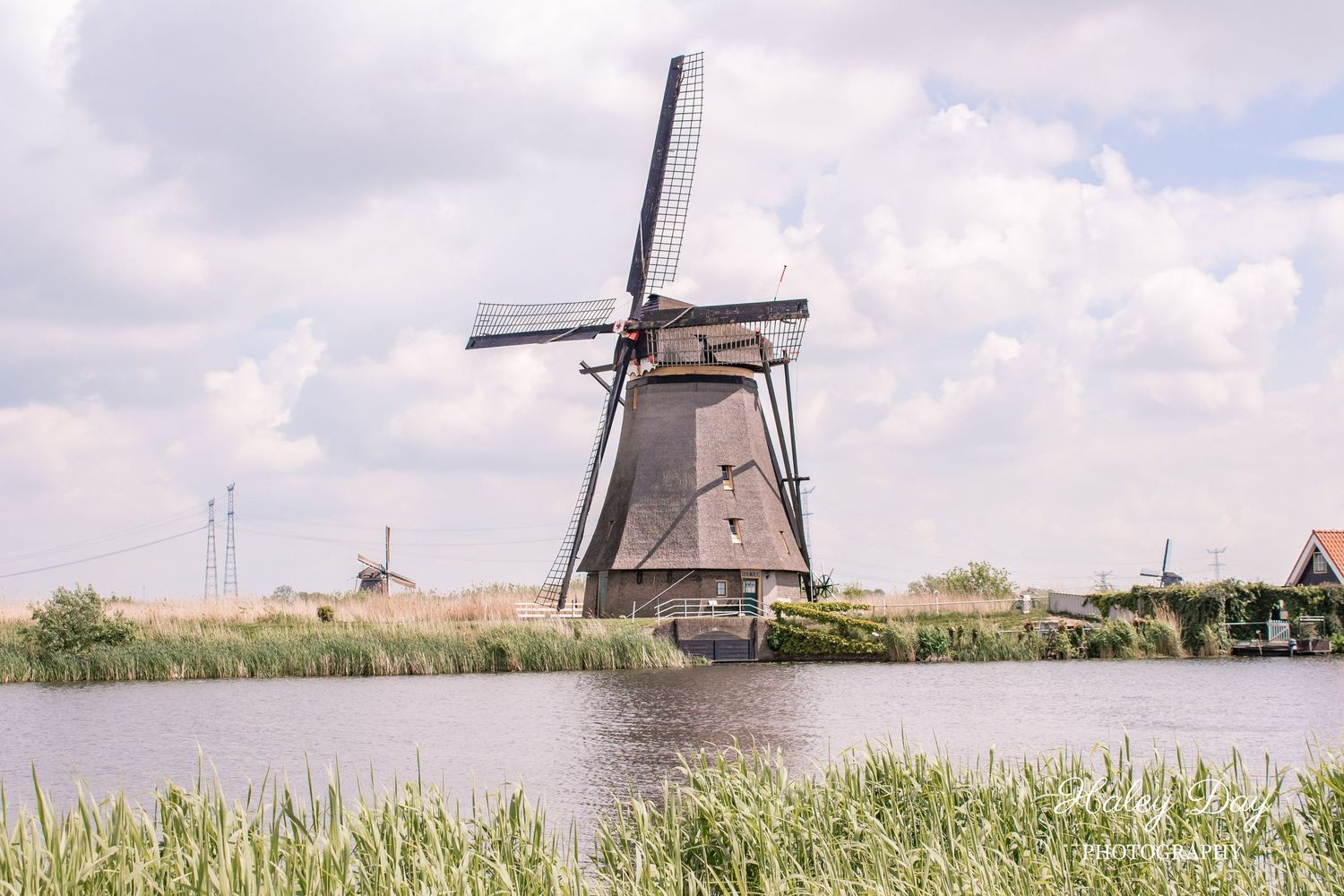 Our first stop was the Windmills at Kinderdijik. These 19 windmills are the largest collection in the Netherlands and is an UNESCO World Heritage Site. We circled the town a couple of times, looking for parking, but soon found our way, walking the docks out to the houses. The windmills are mesmerizing and generate an energy that is hard to describe. The sails are loud, as the wind picks them up and spins them around, and the house rattles, in rhythm with the turning gears. We headed inside and crouched our way from floor to floor, imagining what life would be like to live in the belly of a windmill. 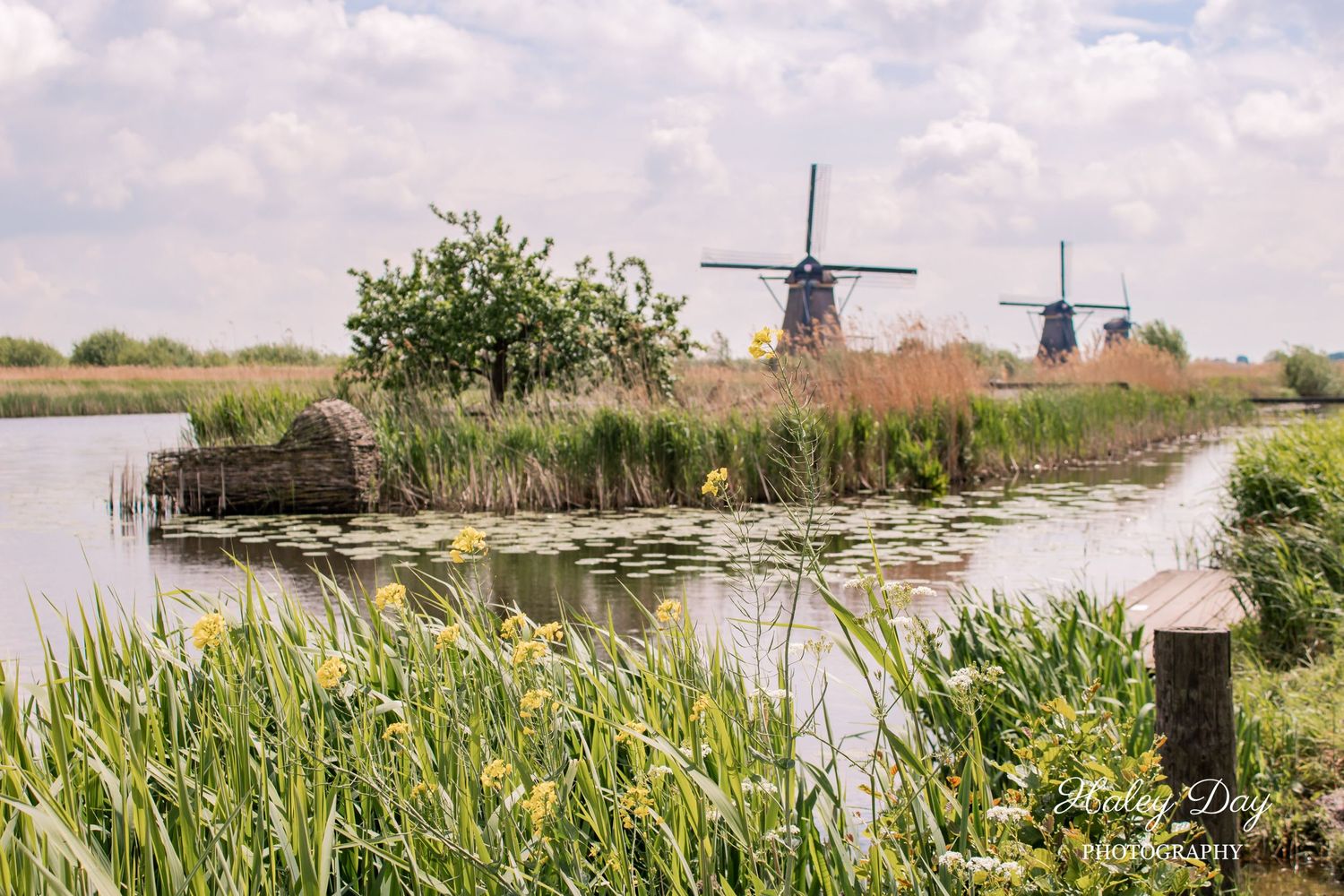 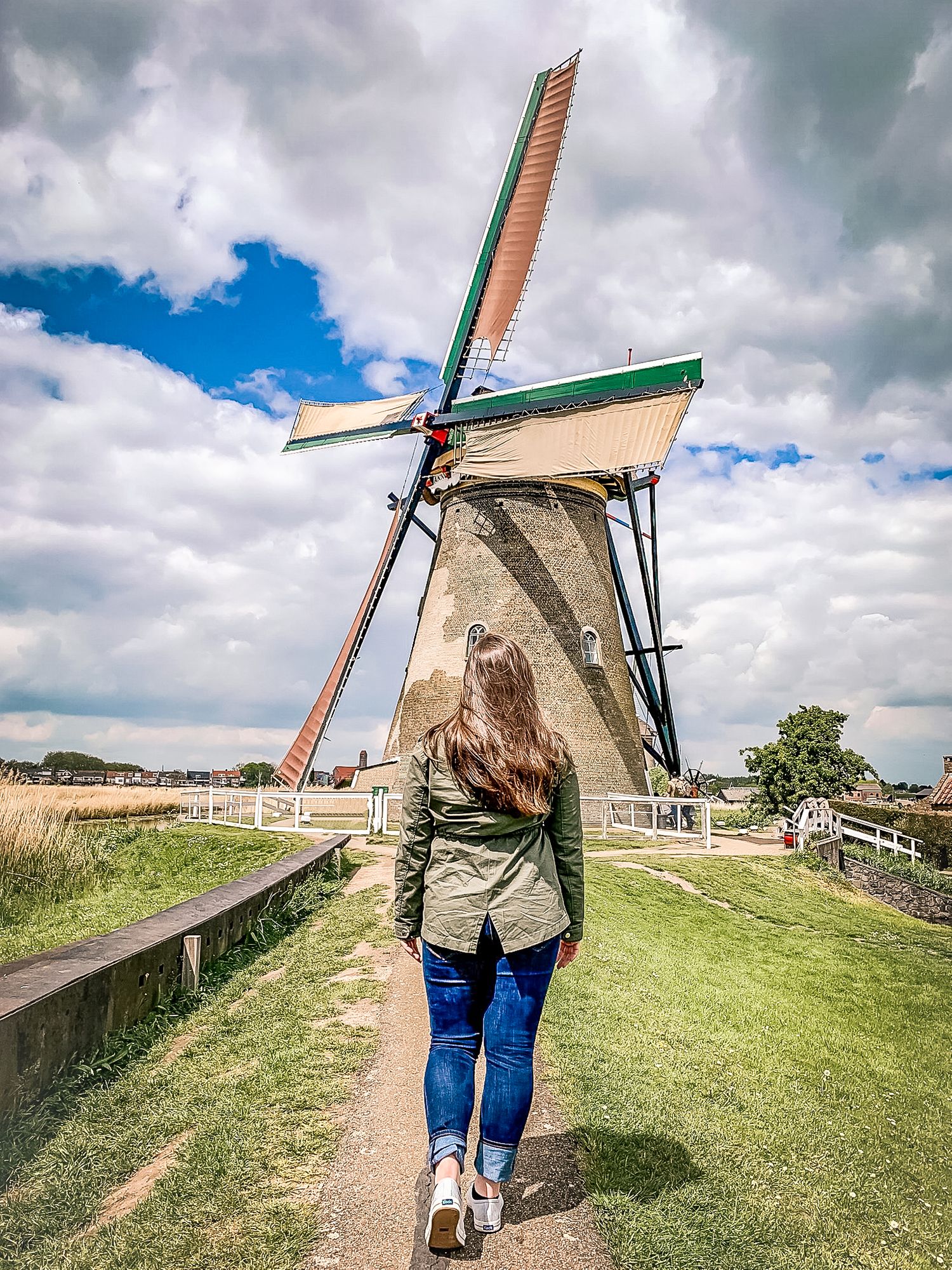 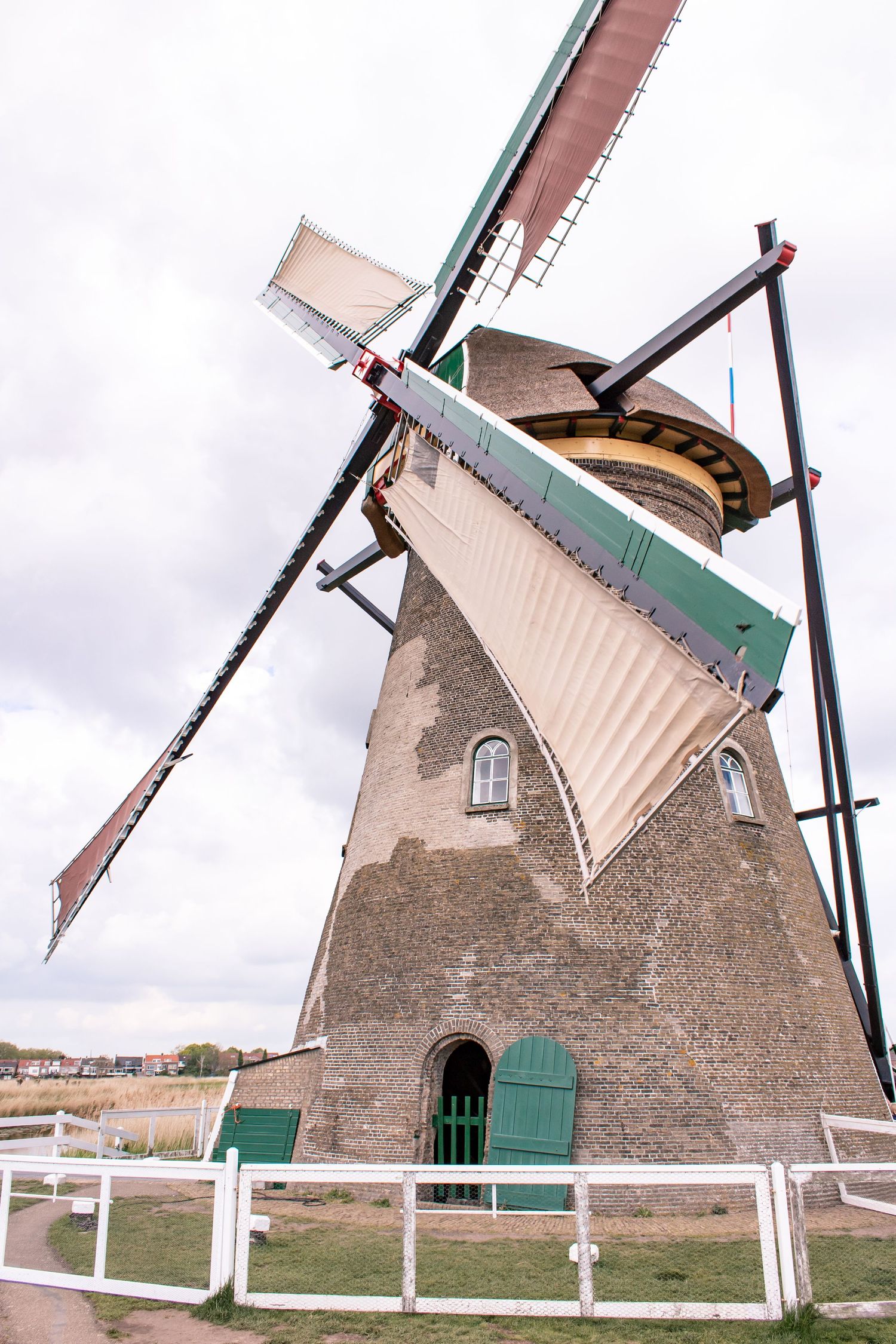 We then headed to the coast, to the Netherlands’ beach town, Scheveningen. As we pulled in to the parking garage I wasn’t sure what to expect from a Dutch beach, but as we got closer to the sound of the ocean, California’s Santa Monica practically spilled out in from of me. Boardwalk with beach fries, a long shore with families playing in the sand, hotels and restaurants beachfront. Scheveningen even has a pier with shops, rides and a ferries wheel. We spent the afternoon walking up and down the planks, deciding between fries or ice cream.

The next morning we packed up the car and headed toward Amsterdam, and with my heart already melting, I tried to give this adored city a second chance. 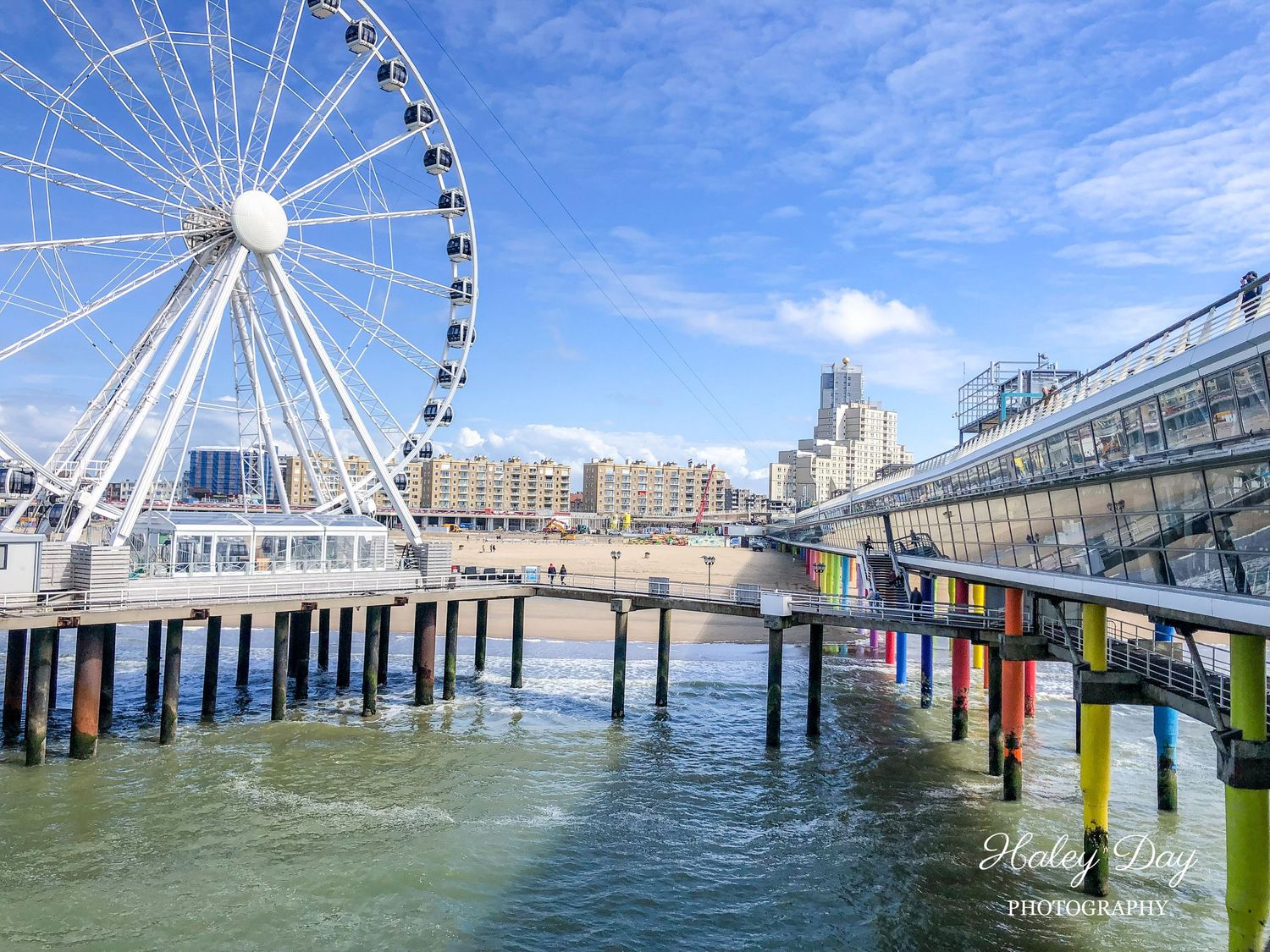 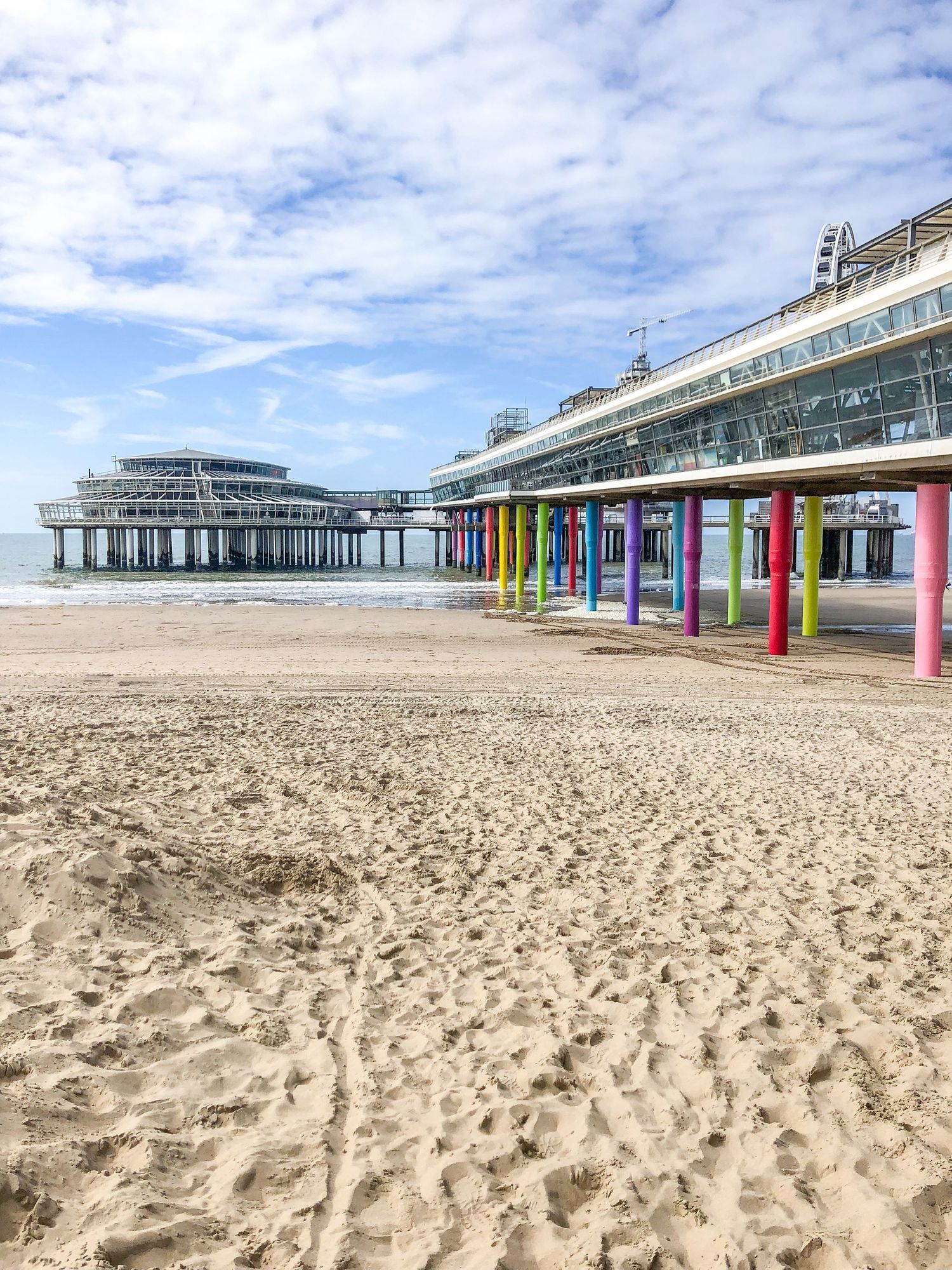 Much like Venice, a large part of the Amsterdam experience is to walk along the canals. This city, branched by water, has something new to be discovered on every street corner. We spent our first few hours in Amsterdam walking along the canals, standing on pedestrian bridges and imagining what life would be like on a house boat. With the camera in head, we walked along, and even joined a free walking tour.

There is so much to see on foot in Amsterdam, and I enjoyed every attraction. Outside of the walking tour we ventured through Dam Square and the Royal Palace (did you know Holland has a Royal family?!), spent the afternoon in Rijksmuseum, and later wandered to the insanely charming district, Jordaan. 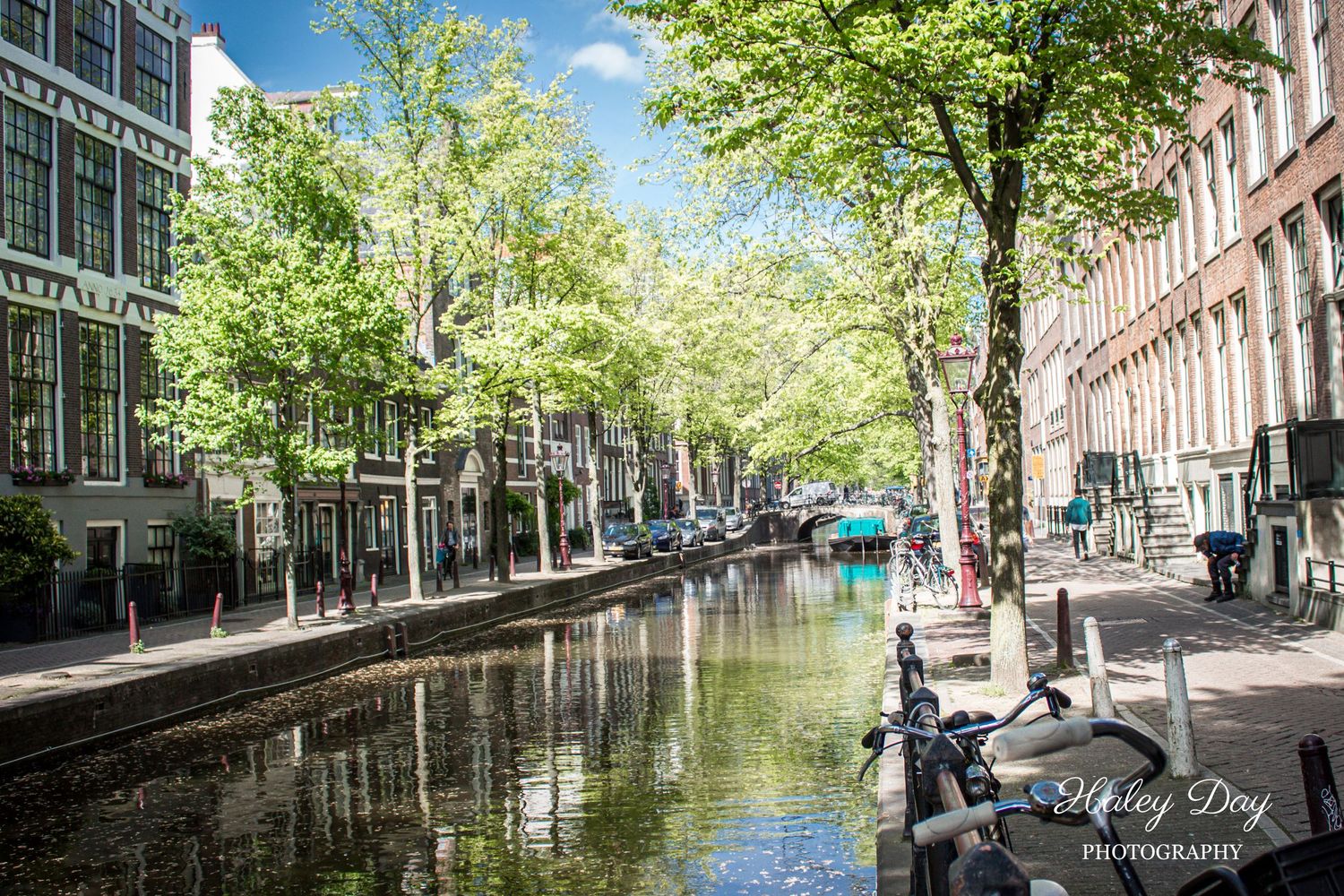 On our first night, we opted for a canal cruise, and whether it is morning, afternoon or when the bachelorette parties come out at night, any time is a great time to cruise through the canals. Our cruise happened to coincide with the Amsterdam Light festival so we opted for a night time reservation. The festival includes 25 art installations that light up the canals, and a boat with hot cider in your hand is the best way to view them. 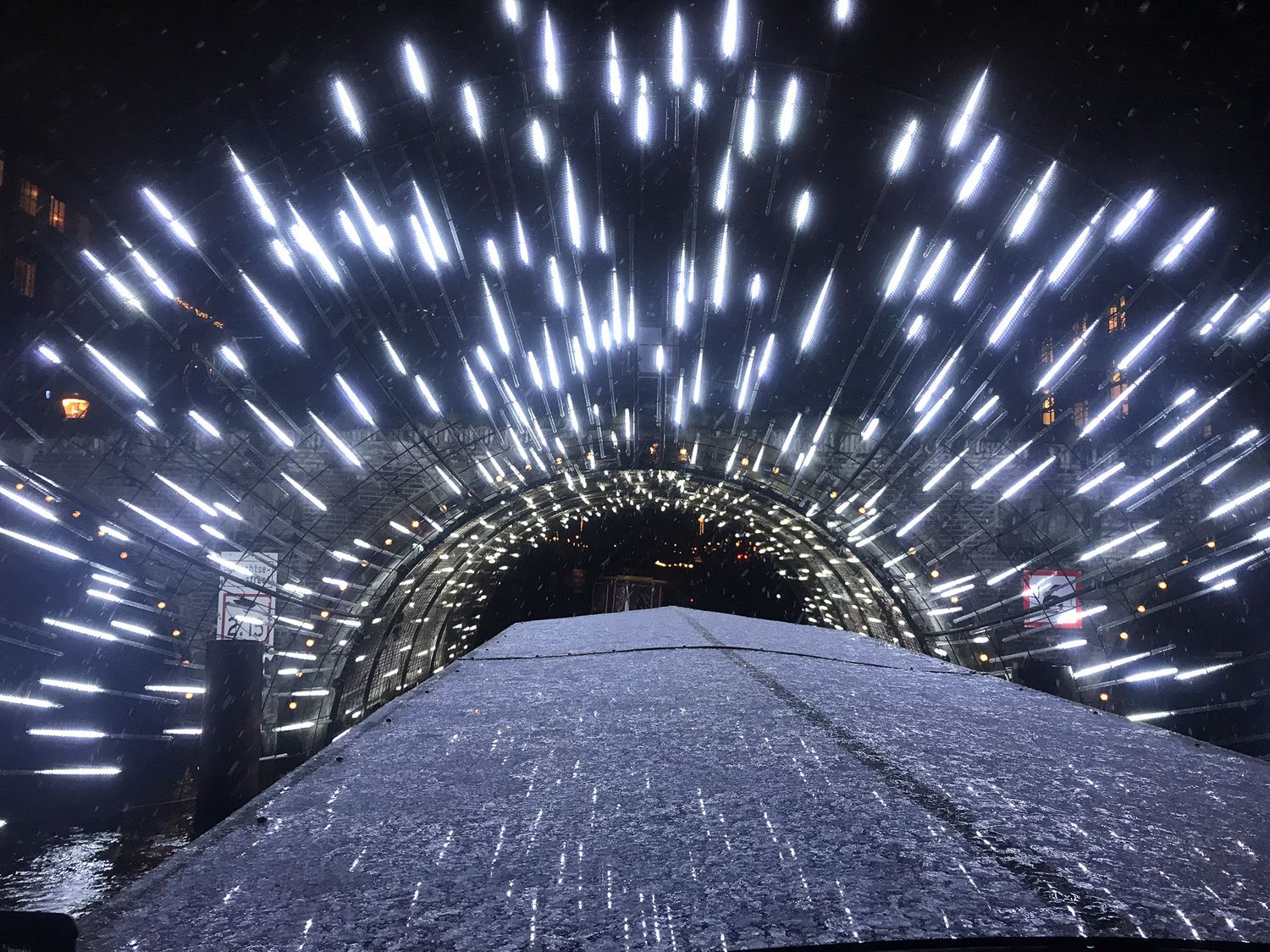 The next morning, we had tickets for the Anne Frank House, which, I struggled with signing up for a tour. What is the line between experiencing history and inappropriate tourism? I had this same conflict when encountering the option to visit the concentration camps in Germany or the unspoiled Skellig Michael island in Ireland.

Both of which I opted not to see.

But with Anne Frank’s house, I decided this was not a tourist destination but rather an experience to gain a true understanding of what Anne and millions of Jewish people suffered. The experience was intense, upsetting and most of all, amazing. You cannot imagine what they went through without having seen it for yourself.

After the tour, our bodies and mind needed something uplifting, and thankfully the antidote was just a two minute walk down the street – Pancakes Amsterdam. There is a great outdoor space to enjoy or you can head inside for the unique decor. I ordered sweet, he ordered savory, and we both got clog key chains to take home. 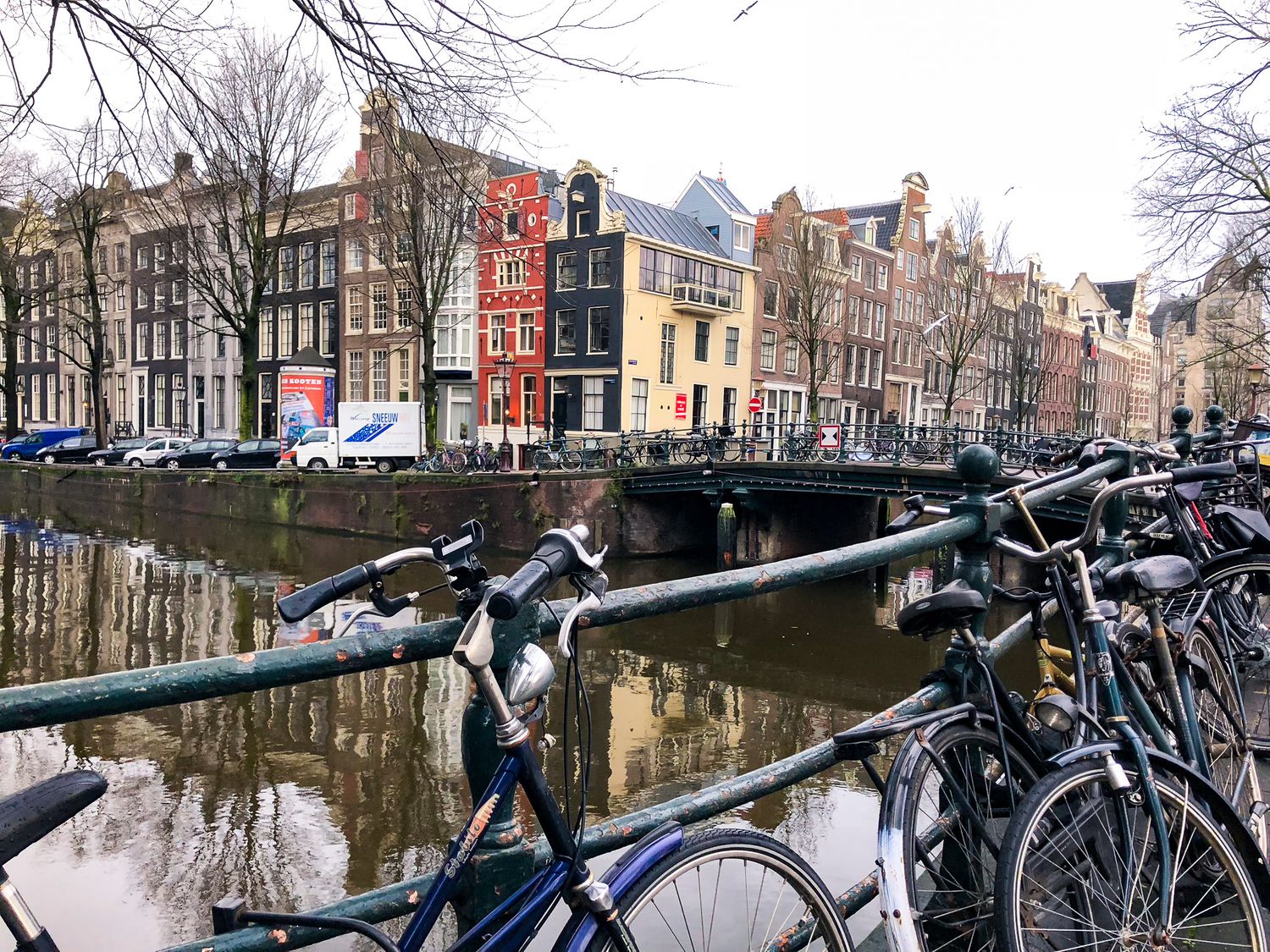 After nearly finishing my pancake we headed toward two museums that are less like a museum and more like a dream gift shop. Of all the boutiques, stores and window fronts you’ll stroll by in Amsterdam, it is worth it to pop in to these two places. The Tulip Museum is bursting with beautiful ornate gifts, blooming flowers and packaged bulbs that can travel home with you. I roamed around the room, twice, touching every little object and flower, saying soft “hellos.” Two doors down, for any cheese lovers in your group, is the Cheese Museum! Two floors of vintage, dutch, and flavored cheeses, informative displays and demos on how to make cheese. I’m not sure which I loved more, stopping to smell each tulip or popping every stinky cube into my mouth. 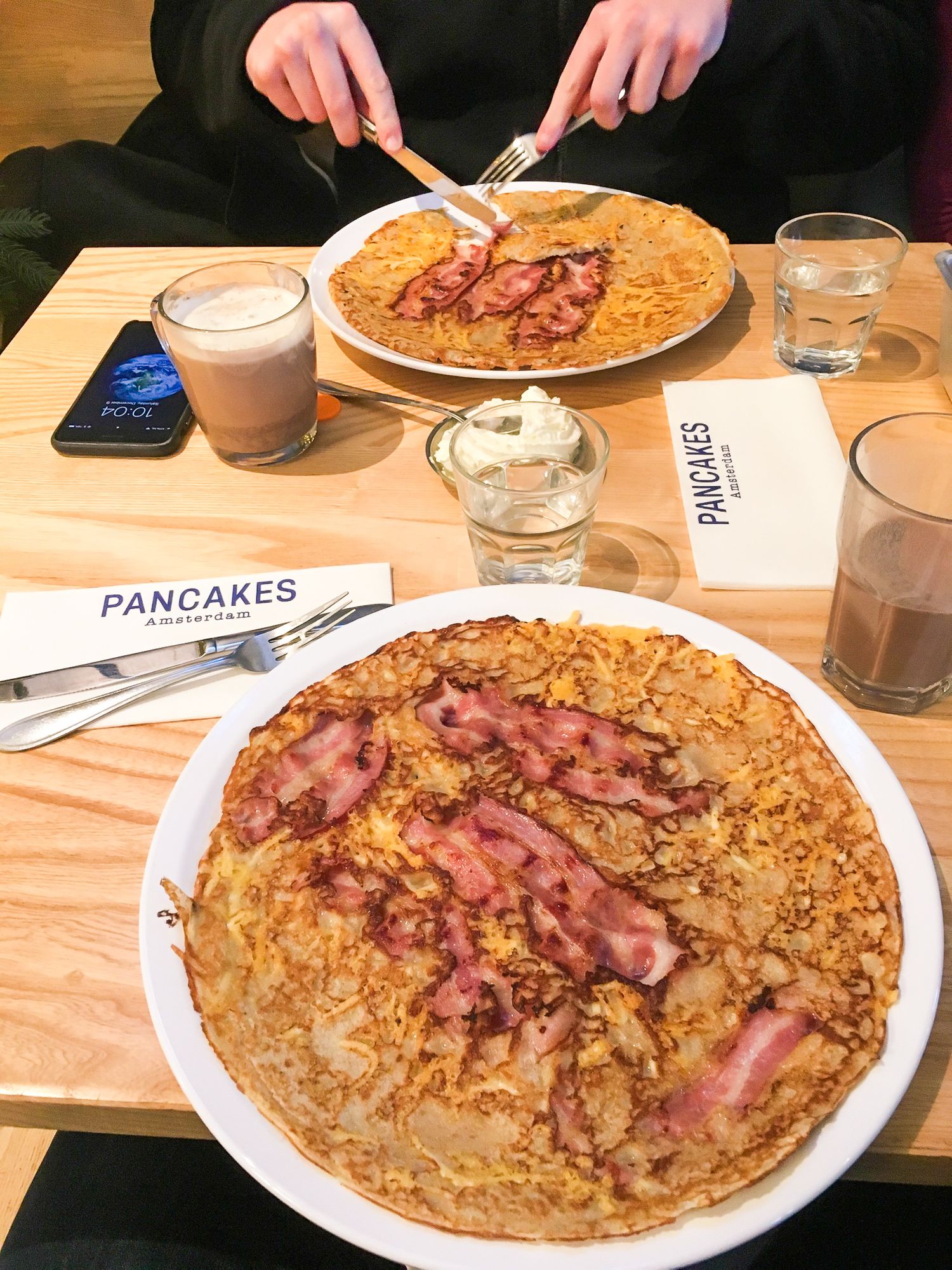 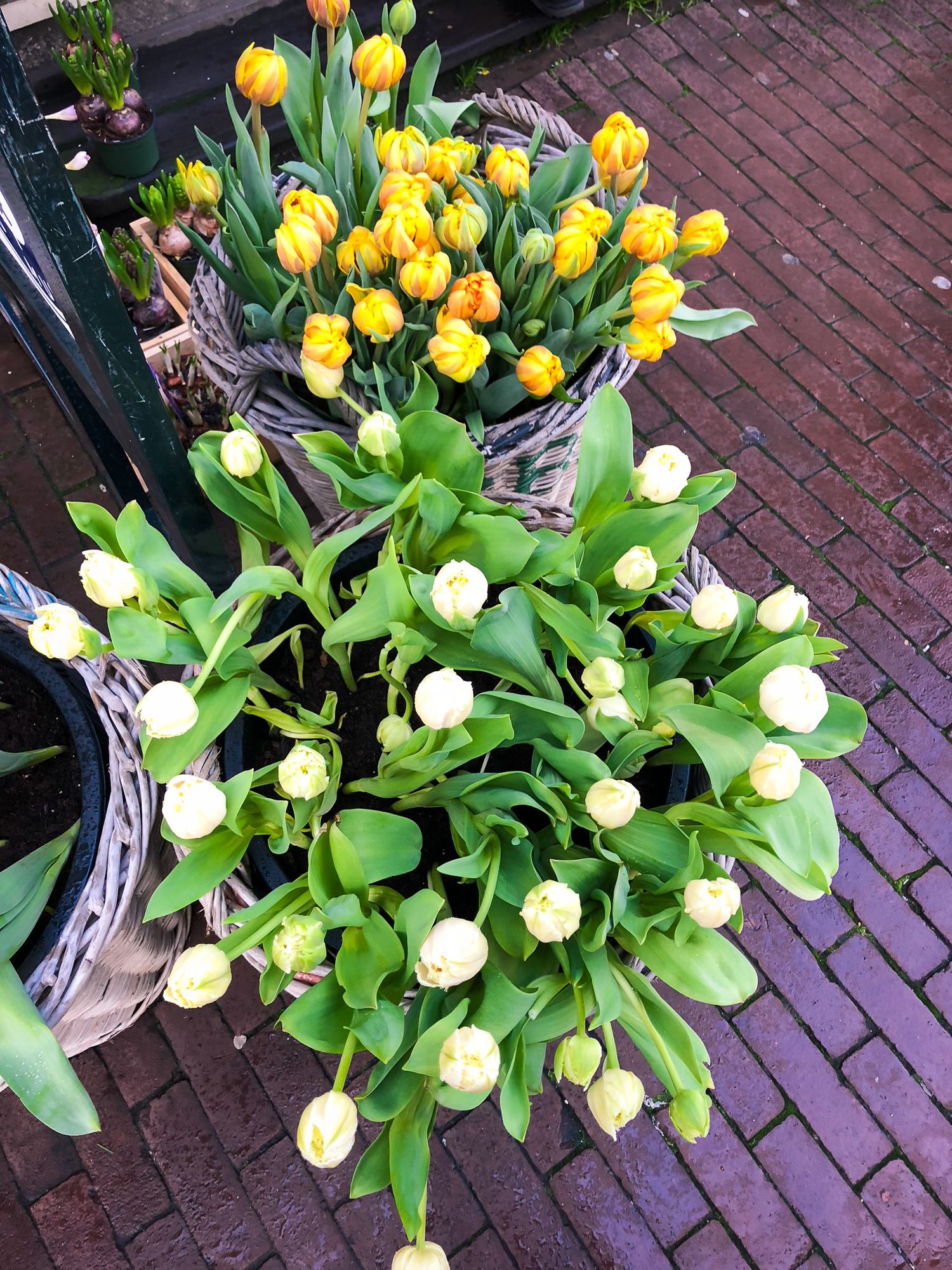 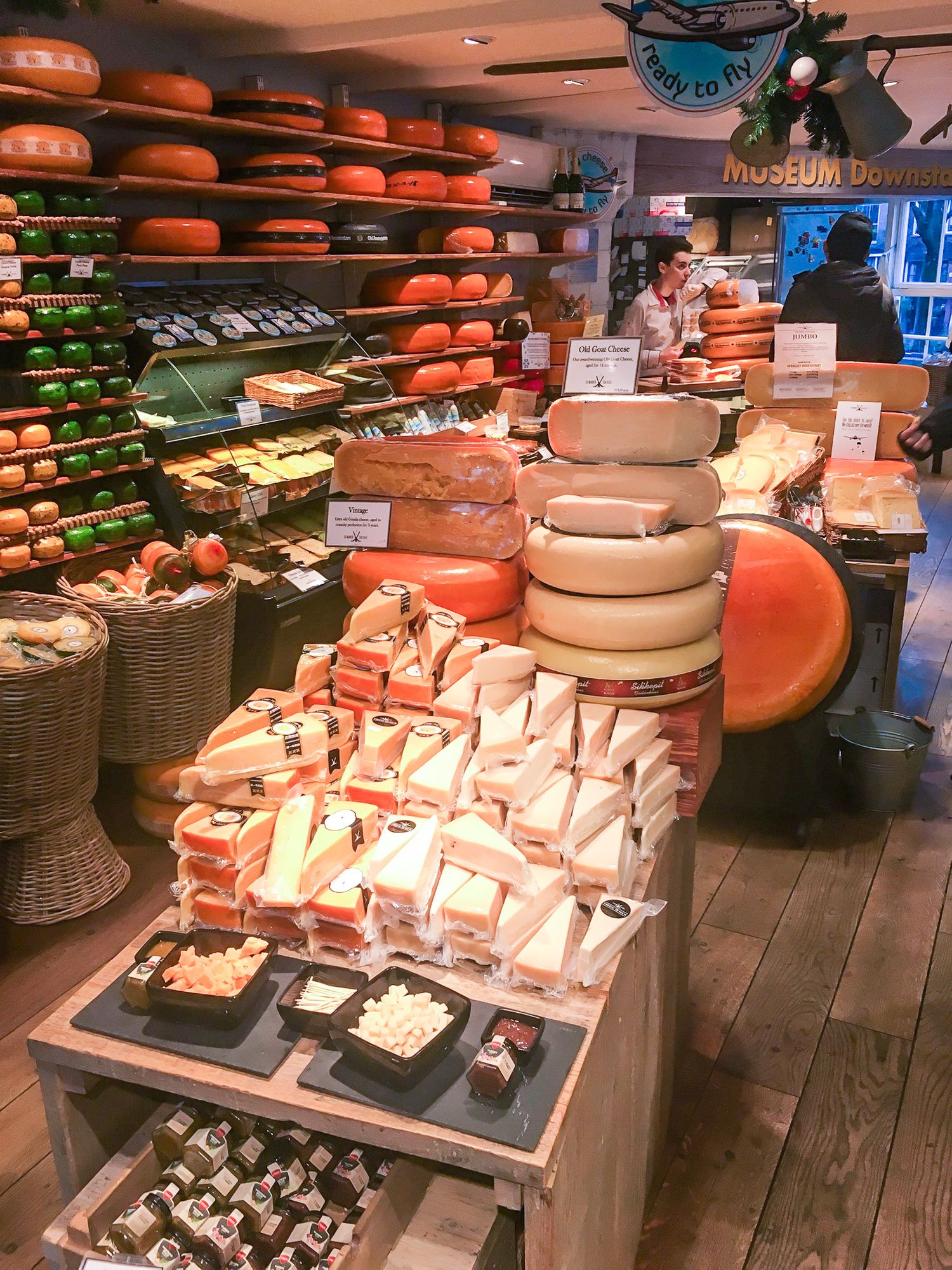 Later in the day we headed to another museum, The Resistance Museum. Which, is a great complement to the Anne Frank House that you probably have never heard of. The Museum is across the city, nearly 40 minutes walking, and it is only open for 6-7 hours of the day, making it a little difficult to swing by. But, that is what makes this a hidden gem. The museum holds a collection of the Dutch resistance during WWII and could take you the better half of two hours to read through it all.

On our last full day, we headed 45 minutes out towards the coast to Keukenhof. Walking in from the parking lot, under the giant acrylic letters, it felt almost like I was walking into a Dutch Disney Land. Which, is probably valid considering Keukenhof is the worlds largest flower garden and attracts 26,000 people per day, beating out both the Eiffel Tower (14,000) and Rijksmuseum (8,000). The gardens are only open eight weeks out of the year, which skews the scales a little, but impressive non the less. We were some of the 1.5 million visitors to Keukenhof in 2019 and were in awe with every step. Planted with seven million bulbs, you can spend hours wandering through the “Garden of Europe.”

Just do not step on the flowers. 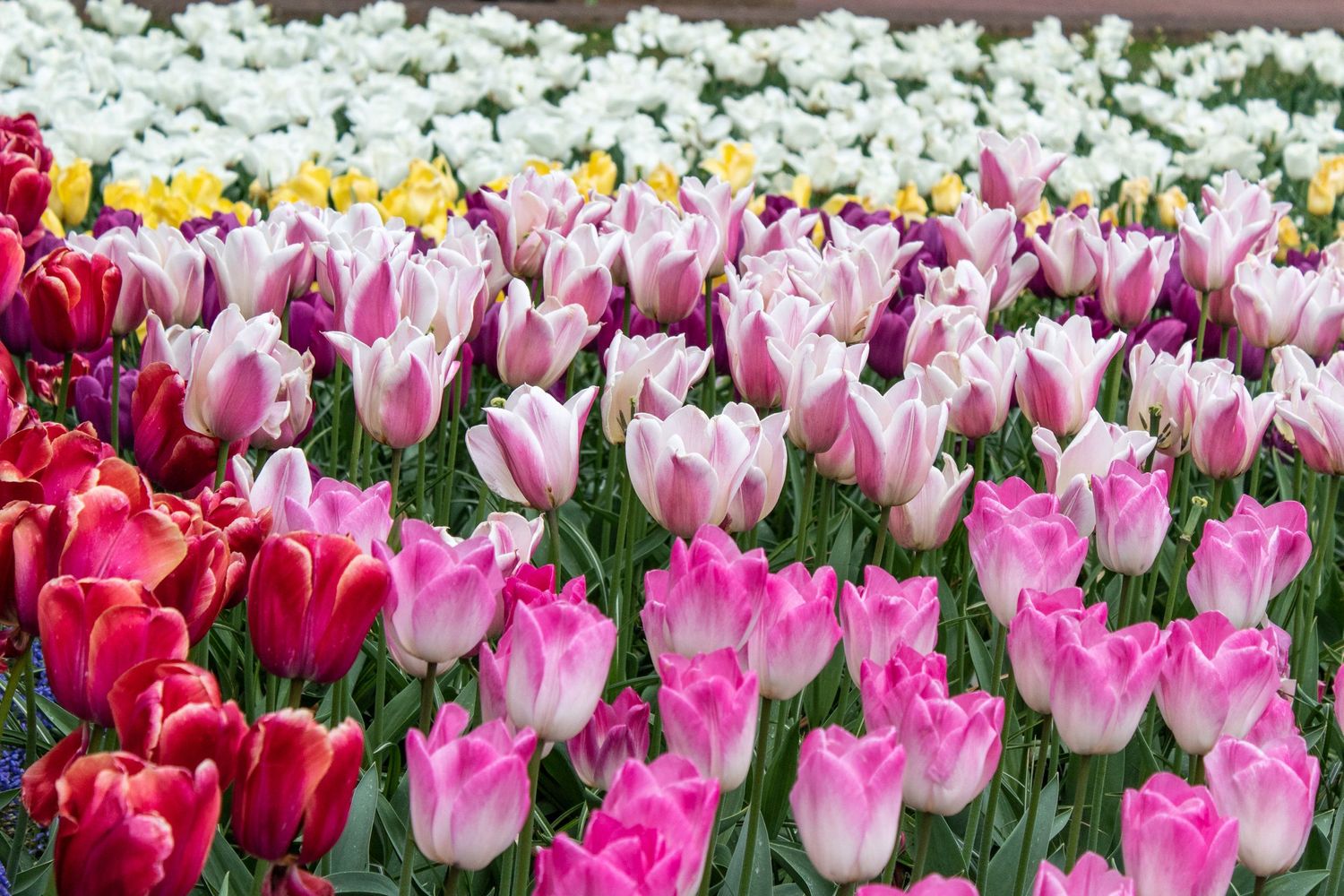 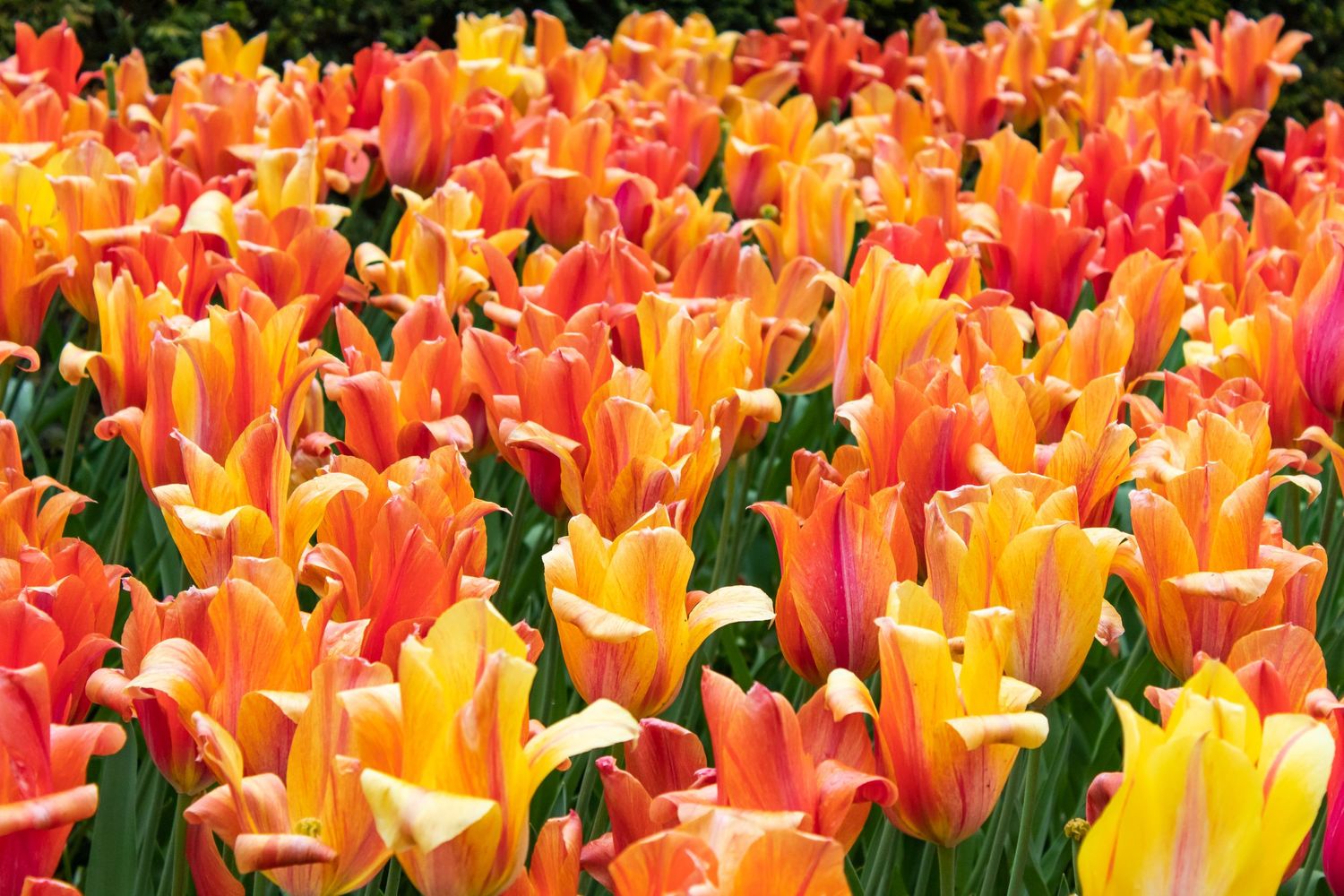 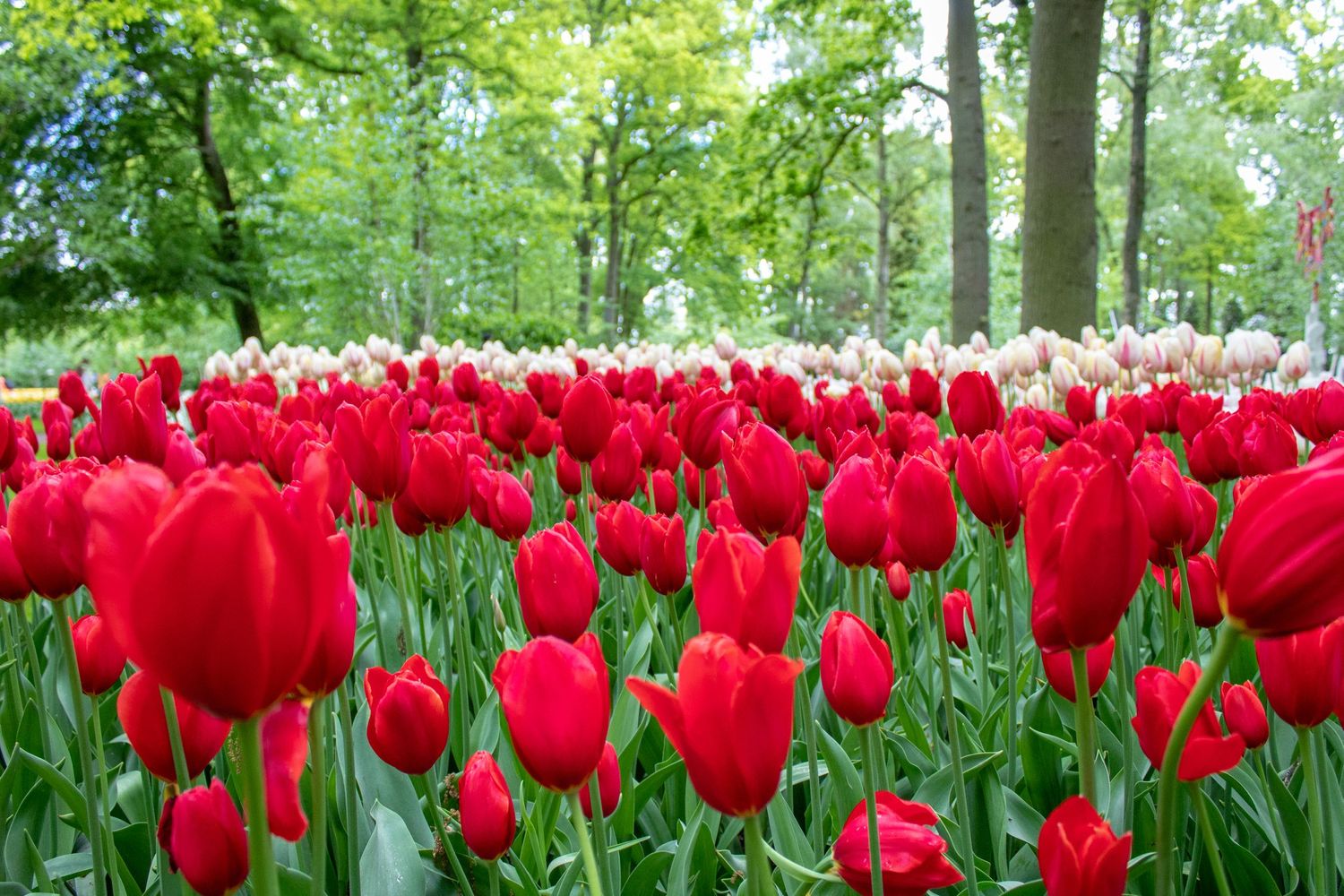 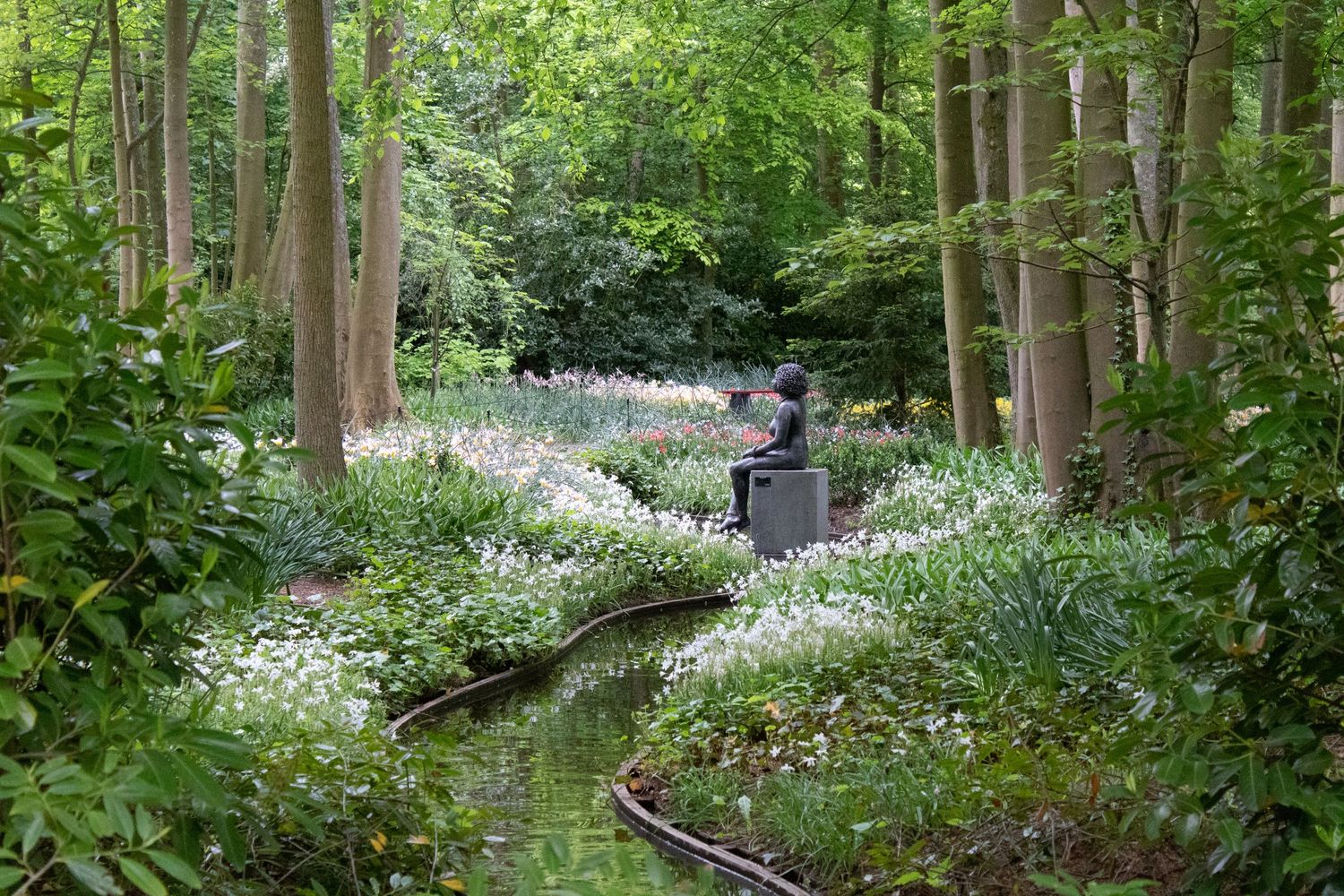 In all, I have only ever spent four nights in Amsterdam, but I think I experienced every highlight the Dutch are known for: windmills, tulips, canals, Rembrandt and even pancakes the size of a pizza. And every bit of Amsterdam’s culture, history and people is worth giving your heart to. It’s streets are safe and charming, the history is deep and moving, and the countryside is beautiful and refreshing,

but I’m still not on board with the fries.